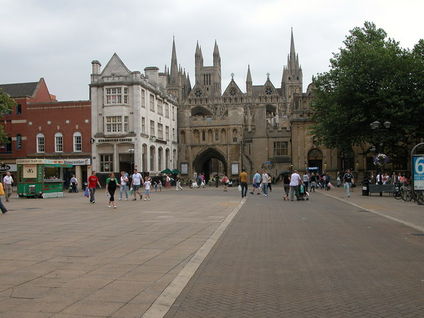 Peterborough is a cathedral city in Cambridgeshire, England, with a population of 202,110 in 2017.

In 1994, Peterborough was designated one of four environment cities in the UK and began working to become the country's acknowledged environment capital. Peterborough Environment City Trust, an independent charity, was set up at the same time to work towards this goal, delivering projects promoting healthier and sustainable living in the city. The council and regional development agency have taken advice on regeneration issues from a number of internationally recognised experts, including Benjamin Barber (formerly an adviser to President Bill Clinton), Jan Gustav Strandenaes (United Nations adviser on environmental issues) and Patama Roorakwit (a Thai "community architect"). W

The Peterborough Millennium Green Wheel is a 50-mile (80 km) network of cycleways, footpaths and bridleways which provide safe, continuous routes around the city with radiating spokes connecting to the city centre. The project has also created a sculpture trail, which provides functional, landscape artworks along the Green Wheel route and a Living Landmarks project involving the local community in the creation of local landscape features such as mini woodlands, ponds and hedgerows. Another long-distance footpath, the Hereward Way, runs from Oakham in Rutland, through Peterborough, to East Harling in Norfolk. W

Lessons from Peterborough: how to get, use and present a city's data, June 17 [3]

Do unto others: on the appropriation of citizen empowerment, Kevin Harris, [4] March 19