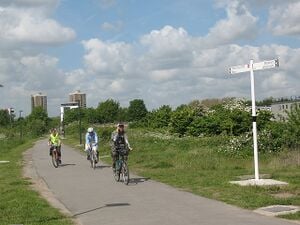 The London Borough of Newham (listen) is a London borough created in 1965 by the London Government Act 1963. It covers an area previously administered by the Essex county boroughs of West Ham and East Ham, authorities that were both abolished by the same act. The name Newham reflects its creation and combines the compass points of the old borough names. Situated in the East London part of Inner London, Newham has a population of 387,576, which is the third highest of the London boroughs and also makes it the 17th most populous district in England. The local authority is Newham London Borough Council.

It is 5 miles (8 km) east of the City of London, north of the River Thames (the Woolwich Ferry and Woolwich foot tunnel providing the only crossings to the south), bounded by the River Lea to its west and the North Circular Road to its east. Newham was one of the six host boroughs for the 2012 Summer Olympics and contains most of the Olympic Park including the London Stadium, and also contains the London City Airport. Major districts include East Ham, West Ham, Stratford, Plaistow, Forest Gate, Beckton and Canning Town.

From Wikipedia:Parks and open spaces in the London Borough of Newham

The London Borough of Newham, in spite of being one of the more crowded areas of London, has over 20 parks within its boundaries, as well as smaller recreation grounds.

The Greenway is a 7-kilometre (4.3 mi) long footpath and cycleway in London, mostly in the London Borough of Newham, on the embankment containing the Joseph Bazalgette Northern Outfall Sewer.

Bow Creek Ecology Park is a small open space along Bow Creek tidal estuary of the River Lea in Canning Town in Newham, in east London. It is operated by the regional Lee Valley Park system.

From Wikipedia:London Borough of Newham § Community

Community Links is a multipurpose charity operating in the East London borough of Newham. It was established by David Robinson OBE and Kevin Jenkins OBE in 1977, and has grown to become one of the UK's largest local charities.

In 2011 Community Links was selected as one of the charities supported by The Guardian's Christmas appeal. Guardian Editor Alan Rusbridger said, "The legendary Community Links charity wrote the book on how to regenerate deprived neighbourhoods and engage with young people."

The organisation has led and developed several innovative projects. Community Links’ advice sessions on unsafe tower block estates in the 1980s inspired the Newham Tower Block Tenants Campaign, and led to demolition of the Ronan Point Tower Block 1986 and establishment of The National Tower Block Campaign.

Former Prime Minister Gordon Brown co-wrote a book with Community Links in 2007. In Britain's Everyday Heroes, Brown referred to Community Links as "the innovative charity at the forefront of community regeneration".

In 2007 Social Finance, along with government, Community Links and St Giles Trust launched the UK’s first social impact bond, a financial instrument designed to raise capital from outside the public sector to pilot new projects tackling social issues. The idea was conceived at Community Links through the Council on Social Action which was convened and chaired by Community Links founder David Robinson. He is chair of Peterborough Prison’s One programme – the first project in the UK to be funded by a Social Impact Bond, and a member of the Big Society Trust, the holding company for Big Society Capital.

Community Links convened and hosts the Early Action Taskforce, which was launched in January 2011. Its members include Sir Stuart Etherington, CEO of the National Council for Voluntary Organisations, and Dame Clare Tickell, CEO of Action for Children. The Early Action Taskforce aims to answer the question "how do we build a society that prevents problems from occurring rather than one that, as now, copes with the consequences?" The Taskforce’s first report, The Triple Dividend: Thriving Lives, Costing Less, Contributing More was launched in September 2011.