From Appropedia
Redirected from Improved cookstoves 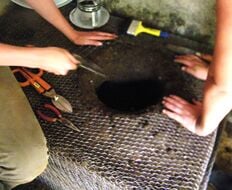 Cooking and heating with solid fuels such as wood, dung, coal or crop waste over open fires or stoves without chimneys can lead to indoor air pollution. This indoor smoke contains carbon monoxide, benzenes, aldehydes, small soot and dust particles and other health-damaging pollutants. A WHO assessment found indoor air pollution to be the 8th most important risk factor for disease. It is a particularly important risk factor for acute respiratory tract infections (ARI) including bronchitis and pneumonia. Each year, IAP is implicated in the deaths of 1.6 million people ( a death every 20 seconds). Because women and children spend the most time near the domestic hearth, they are especially vulnerable [1].

Use of cleaner burning fuels, access to improved stoves and/or behavior changes could substantially reduce exposure to indoor smoke and associated diseases [2].

The world's forests are shrinking under tremendous pressure from agricultural and lumbering activities. In some areas, the intensifying search for fuelwood, the primary cooking fuel for the South, is an important contributor to the problem. Most of this wood is burned in open fires or inefficient stoves. When wood is simply too expensive or too far away, animal manures and crop residues formerly returned to the soil as fertilizers frequently are burned as fuel instead. This practice, increasingly common in many parts of Africa and South Asia, adds to a downward spiral in soil fertility. Once the trees and vegetation on hillsides are removed, soil erosion proceeds rapidly with rain water runoff and flooding, and the land can be turned into a desert. Current patterns of daily firewood consumption around the world are thus important factors in an advancing environmental crisis.

Since the late 1970's, much work has been done on the design and dissemination of simple, low-cost improved cookstoves. Such stoves can save up to 40% of the wood fuel normally consumed in open fires, and 25-35% of the fuel consumed in typical traditional stoves. The collective experience of this work is described in Burning Issues. After much enthusiastic pursuit of a variety of strategies to encourage owner-building of stoves, experienced observers are concluding that the small industry production of stoves is one of the most promising routes to take. The advantages of this approach include better quality control and therefore higher efficiency and longer stove life than can be achieved with owner-building. Costing $1-5 each, the stoves can often pay for themselves in fuel savings within 1-2 months if the fuel is purchased. In rural areas where most fuel is gathered, very low-cost stoves can still be sold to some people, but the distribution problem is much more difficult, and clearly successful strategies have yet to be worked out.

Fuel conservation through improved cookstoves appears to be the cheapest way for a nation to invest in new sources of energy. The typical artisan-produced cookstove conserving 35% of fuelwood costs less than $5. Three improved stoves have the same effect on fuel supply as one family biogas plant (which would cost 40- 50 times as much) - both mean that one additional family's cooking fuel needs can be supplied. The capital investment will be higher for electric or kerosene stoves, and one must also consider the cost of adding to the electrical generating capacity and extending the electrical grid. Both electric and kerosene stoves have the added daily cost of fuel, which in the case of the improved stove is nil (because improved efficiency alone accounts for all of the gain). The common subsidies and the foreign exchange requirements make kerosene imports burdensome for the national economies of many countries.

The secondary effects of existing cooking systems must be understood before acceptable improvements can be made. In many places, smoke from indoor cooking fires is a significant contributor to lung and eye disease. Yet this smoke also serves to dry crops hung over the cooking area and to protect thatched roofs from insect damage. In highland regions and other colder areas, the space heating function of the indoor cooking fire may need to be included in cookstove design. Successful stove promotion efforts may depend on the availability of effective alterations for these secondary functions of the cooking fire.

Experience has shown that despite the need for wood conservation on a massive scale, adoption of improved stoves cannot occur immediately for an entire nation or region. It will, instead, depend on involvement of local people in careful, systematic work which emphasizes testing and cooking methods. Existing stoves and new prototypes can be tested with a minimum of equipment. Testing techniques are covered by several of the books in this section.

Most knowledgeable people have revised their estimates of the fuel savings possible with the typical new stove. A 35% savings is now considered a realistic figure for the better stove designs. Similarly, most agree that the distribution of improved stoves alone is not going to greatly affect the rate of deforestation in most places. Nevertheless, improved cookstoves are now considered to be a cost-effective component in reforestation programs in some countries, and clearly they have a role to play in improving the quality of life by conserving family resources of cash and time, and reducing smoke in the cooking area.

Many thanks to David Bartecchi of Village Earth for the initial content.

Some or all of these design features help make a stove more fuel efficient or reduce health problems associated with taditional cooking fires:

Much of the research and development work carried out on biomass technologies for rural areas of developing countries has been based on the improvement of traditional stoves. This was initially in response to the threat of deforestation but has also been focused on the needs of women to reduce fuel collection times and improve the kitchen environment by smoke removal. There have been many approaches to stove improvement, some carried out locally and others as part of wider programmes run by international organizations. Figure 2 below shows a variety of successful improved stove types, some small, portable stoves and others designed for permanent fixture in a household.

Improving a stove design is a complex procedure which needs a broad understanding of many issues. Involvement of users in the design process is essential to gain a thorough understanding of the user’s needs and requirements for the stove. The stove is not merely an appliance for heating food (as it has become in Western society), but is often acts as a social focus, a means of lighting and space heating. Tar from the fire can help to protect a thatched roof, and the smoke can keep out insects and other pests. Cooking habits need to be considered, as well as the lifestyle of the users. Light charcoal stoves used for cooking meat and vegetables are of little use to people who have staple diets such as Ugali, which require large pots and vigorous stirring. Fuel type can differ greatly; in some countries cow dung is used as a common fuel source, particularly where wood is scarce. Cost is also a major factor among low-income groups. Failing to identify these key socio-economic issues will ensure that a stove programme will fail. The function of an improved stove is not merely to save fuel.

One of the most important aspects of improved cook stove design is what materials you use.

For combustion chambers, keep in mind that the wood can be shoved in with considerable force and the chamber should be able to stand up to some abuse

Since 1982, the Kenya Ceramic Jiko (KCJ), an improved charcoal-burning stove aimed at the urban market has been developed and manufactured by large numbers of small producers. The KCJ has two main components; metal and fired clay. Both these parts are made by entrepreneurs; the metal part (cladding) being made by small-scale enterprises or individual artisans, while the clay part (liner) is manufactured by slightly larger and more organised enterprises or women’s groups. The KCJ is sold by the artisans directly to their customers or through commercial outlets such as retail shops and supermarkets. The stove was initially promoted heavily to develop the market, by the NGO KENGO and by the Kenyan Ministry of Energy, through the mass media, market demonstrations and trade fairs. As a result of this substantial promotion, there are now more than 200 artisans and micro-enterprises manufacturing some 13,600 improved stoves every month. To date, it is estimated that there are some 700,000 such stoves in use in Kenyan households. This represents a penetration of 16.8% of all households in Kenya, and 56% of all urban households in the country. [4]

Groups including the Kobus Venter's Vuthisa Technologies[5] and EWB San Francisco Professionals Chapter[6] are doing research into optimizing such stoves, including using briquettes made from waste biomass (e.g. agricultural waste) with a simple briquette press.

The fuel used can have a great impact on the smoke produced, as well as affecting the environmental impact. CharcoalW is much cleaner burning than wood or dung, but is usually made from wood.

Amy SmithW has done work on producing charcoal from other forms of biomass. To make the biomass stick together, a binder is used. (Another method of making briquettes more cohesive is to leave the biomass in water for a couple of days to decompose slightly.) The choice of biomass depends on what is widely available, but includes bagasseW (sugar cane waste) bound with a paste of cassavaW root (also called manioc or tapioca); and wheat or rice straw bound with a small amount of dung, in areas where pure dung is normally burnt.[7]

A program called CFD-GEOM can be used to model cookstove designs.

The Wood gasification stove is probably the most efficient stove design possible.