From Appropedia
Redirected from Fertilizer

Fertilisers are substances that can be supplied to the soil so as to improve the soil quality and promote the growth of any plants grown in this soil. Fertilisers come in several types and correct application differs depending on this type. Differences on application may include: method of introducing the fertiliser into the soil, the time of the year when the fertiliser is administered, etc...

There's actually little doubt that fertilizers harm ecosystems. But is this inevitable, and what are the alternatives? Limited use and precise application reduce the effect of eutrophication on waterways. More recent discoveries, e.g. the role of soil fungi, the impact of compost teas, and terra preta, show that there may be much greener ways to create abundance in food production.[verification needed] However, this knowledge is still in its early years - the knowledge is still being developed, and the valuable knowledge that already exists has not yet spread widely.

fosfates, sulfates, nitrates are thus the forms in which the elements are absorbed Fosfates and gelates are also used as agricultural fertiliser !

Especially N, P, K, Mg are added as fertiliser. The trace elements are usually present in sufficient quantities, but the soil is usually badly equipped to let the plant absorb the elements

Potassium (K): Has a relation to nitrogen; even ratio N-K needs to be respected !

Too much potassium gives problems with magnesium

Potassium is stick to clay-humus complex

(Too much/little ?) Calcium: usually provides a problem with the watertransport inside the plant

Always ask a soil analysis before commencing to fertilise ASEF --> can be contacted for soil-analysis sets (belgium) personal mobile soil analysis tests --> are only capable of determining PH, ...


Organic fertilisers: never exceed by more than 10% per element (expensive fertiliser if bought)

Burying of green manure: maximum 20 cm deep (with a 2cm thick layer). A similar depth is probably also useful for other fertilisers. In order to dig in the fertiliser at this depth, tillage may be needed.

Organic fertilizers are important as they:

As soil improvers, the following are usable:

Good compost is a living whole of a variety of bacteria and other organisms that constantly convert plant waste into humus. Compost is ready for sale at a garden center, but it is also well possible to make it yourself.

Compost is a better soil improver than stable manure, especially on more acid soils. Fresh manure from the stables will contain many nutrients (especially N) and too fresh organic material. Therefore, the manure can best be left to settle. We make good old manure by mixing cow manure (main component) with an other type of manure, compost and organic material. We place this in a pile and cover it with a finger-thick layer of soil. After 3 months, the manure is ready for use. Old manure contains, similar to compost, a rich whole of soil organisms and brings these, besides nutrients, into the soil.

To protect the soil organisms in the winter, the soil is best kept covered. For this purpose we sow green manure such as winter rye or ryegrass in late summer that we then dig under in the spring. It also acts as a catch crop for the nutritional elements present in the soil. The green manure takes up the nutritional elements from the soil and it will release these in the spring, after mineralization (especially N). We can also sow leguminous plants (such as clover, vetches, ...) in early spring and dig these under later-on in early spring. The root nodules gather N-gas from the air and lock it in the soil. This is especially interesting for leafy vegetables.

The shortage in certain nutrients can often not be remedied with the use of compost and old stable manure. We will then need to resort to fertilizers that contain specific nutrients in higher concentrations.

When and how to fertilize[edit | edit source]

The timing: depends on the soil type. Sandy soils are best foreseen of compost or old manure in february. On clayish soils this is best done in autumn. When we would fertilise sandy soils in autumn, a large part would be rinsed to deeper soil layers, where it is unreachable by the plant roots. This is an issue specific to light/sandy soils due to their already loose structure. On clayish soils with a a dense structure, the trough-flushing is low. By already fertilising in autumn, the clods produced by the soil improver can freeze-break in winter.

The digging-in of the manure. In most gardens the manure is simply dug in, this is however not recommended. By simply digging-in, we destroy many of our soil organisms. Each type of micro-organism lives at its own depth in the soil. By digging and turning the soil around, we bring the topsoil a depth where many micro organisms suffocate. A good way to process manure and compost, without disturbing the soil too much is to dig shallowly. It is sufficient to dig in the fertilizer in the 5 to 10 cm-layer under the soilsurface. 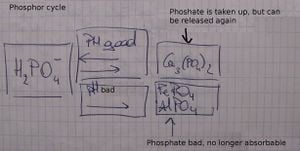 Workings of lime in the soil[edit | edit source]

Liming is more focused on improving the soil structure and soil pH then the supplying of crops with Ca.

In a liming advise, the lime dosage is given in kg abv per ha. Eg: calcium dosage of 1000 kg abv per hectare, with the use of agricultural lime powder with a abv=50 means the administration of 2000 kg/ha .

When to administer[edit | edit source]

Page data
Retrieved from "https://www.appropedia.org/w/index.php?title=Fertilizers&oldid=602151"
Cookies help us deliver our services. By using our services, you agree to our use of cookies.
Categories:
Maintenance categories:
Comments
Privacy policy · About Appropedia · Disclaimers · Mobile view · Content is available under CC-BY-SA-4.0 unless otherwise noted.
</html