From Appropedia
Redirected from Terra preta 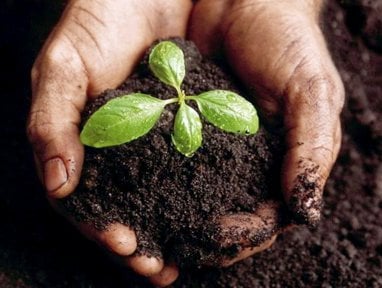 Biochar is a name for charcoal (pyrolized plant matter), especially in usage as soil amendment. It represents a scalable low-tech strategy for carbon sequestration in the soil.

Charcoal has many effects on soil fertility, although it is not much of a nutrient in itself. Some of the world's most productive soils (e.g. Canadian prairies, Russian Chernozem / or "black earth") are very rich in organic carbon. This is now thought to be pyrogenic in origin, likely originating from prairie or forest fires. This carbon is often thousands of years old, demonstrating its stability in soil.

Besides improving agricultural productivity, charcoal in the soil may serve as a long-term carbon sink, trapping elements that would otherwise contribute to greenhouse climate effects. For more extensive background on Biochar, please consult the Wikipedia entry on biochar. 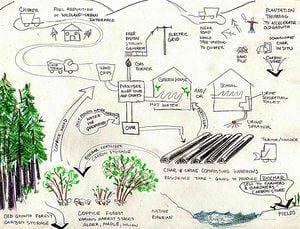 Agricultural charcoal production and interment is a key cyclical ingredient in the regeneration of human habitats, with potential economic significance.

Biochar as a method of carbon sequestration[edit | edit source]

The earth absorbs around 18 times the amount of carbon emitted by humans each year.[verification needed]W However, about the same amount (one figure given is 99.9%) of this carbon is released to the atmosphere through decomposition. This cycle can be closed by a process known as pyrolysis, in which biomass is heated in the absence of oxygen, creating charcoal and locking carbon in the form of biochar.W

Locking carbon away from the atmosphere and the carbon cycle described is referred to as carbon sequestration. Biochar can potentially lock away carbon carbon for hundreds or even thousands of years. If a real commitment were made, massive reductions in atmospheric carbon could be achieved - locking down carbon emissions and increasing the wealth of our soils. In conjunction with other geoengineering projects, biochar may truly hold the key to saving our earth from climate catastrophe.

Biochar is also an effective and ecologically friendly soil amendment. It may also have applications in energy production[verification needed] and as a dietary supplement for animals.

Its production was practiced by pre-Columbian Amazonian natives ("terra preta"), and natural processes appear to have created a similar affect in other parts of the world, creating rich soils.

Biochar is not a solution on its own, but it appears to be an important element in comprehensive solution. See Measures to stop global warming.

Several small-scale units have been devised for baking charcoal, many with simple common materials. Charcoal making (pyrolisis) dates back thousands of years in human history, traditionally practiced via earthen pits and mounds. Today, steel drums of different sizes are most commonly utilized due to portability, airflow control options, heat resistance, and availability. See articles below for some examples, and a page on Simple Biochar Kilns.

A variety of feedstocks can be used. Since these often constitute agricultural residues in rural communities, a form of waste is turned into an asset. Possible feedstocks include:

Terra preta is a type of very dark, fertile anthropogenic soil found in the Amazon Basin. It is basically a mixture of charcoal, bone, and manure. It is very stable and remains in the soil for thousands of years.

Critics are concerned that large scale biochar production may increase deforestation and pollution levels. However, a variety of biomass feedstocks other than wood can be used (see above). Old-growth forest is likely not a good feedstock because of extensive pre-processing that would be required. Small biomass pieces such as pellets or cherry pits make excellent feedstock. Air pollution from biochar production can be greatly reduced and eliminated through proper production system design.