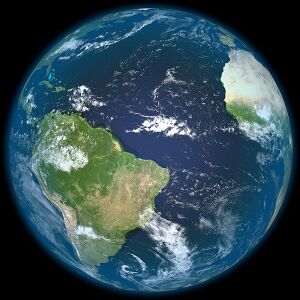 Earth refers to the planet we live on, our home, and home to millions of different life forms. The Earth is also known as "the world".

The third planet from the Sun in the Solar System (located in the Local Interstellar Cloud, Local Bubble, Orion–Cygnus Arm, the Milky Way), Earth is known as the "Goldilocks planet" because it has the conditions suitable to sustain life. It is the largest of the four terrestrial planets in the Solar System.[1] Thus far, it is the only known astronomical source sustaining life in the Solar System, making it a very special place indeed.[1]

Geology is the science used to study the Earth. It is through geological research that scientists have been able to piece together when and how Earth was formed over enormous spans of time. Geology must cover time spans of tens of thousands to millions of years when looking at Earth's history. This can be hard for the human mind to grasp, but that doesn't make the time scale any less real.

Through scientific research, the age of the Earth has been found to be about 4.54 billion years.[1] Life on Earth arose around 3.5 billion years ago when the first living cells developed.[1] Human origins form only a small portion of Earth's history.

Earth as a system[edit | edit source]

Earth is a complex system, consisting of the atmosphere, biosphere, hydrosphere and interior. Each component interacts with each other component. For the study of Earth, the component parts need to be studied independently to better understand them but such closer research of each component must always be done with a constant view to how the components contribute to and interact with the whole Earth system. 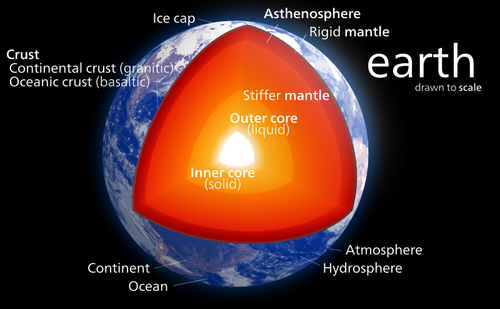 The Earth has long inspired human awe, inspiration and determination to survive upon it.

An interesting point to ponder is how much humanity has learned about the miraculous nature of life, the amazing balance of this Goldilocks planet, from being able to finally see our amazing planet from space. In 1948 Sir Fred Hoyle commented: "Once a photograph of the Earth, taken from the outside, is available, a new idea as powerful as any in history will be let loose." From the 1930s, grainy and incomplete photographs of the Earth were taken from balloons and rockets, revealing the curvature of Earth and giving humanity its first glimpses of the amazing planet it resided upon.[2] By the 1950s, humanity was able to see photographs of Earth against the black backdrop of space.[2] In 1972, on 7th December, the most iconic image of the Earth was taken by the crew on the Apollo 17 spacecraft.[3] This image is known as "The Blue Marble".[3] One of the most widely distributed images in human history,[3] it has had a significant impact on human understanding of our place in the universe, a unique and beautiful perspective. In 2015, 43 years after The Blue Marble was taken, NASA released a new photo of the Earth in its entirety (not a stitched-together or composite format as many photos of the Earth tend to be), as taken by the onboard camera of the Deep Space Climate Observatory (DSCOVR).[4] NASA intends to take "daily selfies" of the planet using the Discover satellite when fully operational, which will be one more source by which we can monitor and gauge the planet's health and changes, such as atmospheric changes, cloud height and ultraviolet reflectivity.[4]

For astronauts, the few human beings to have seen Earth through their own eyes and not the medium of the camera, the recognition of Earth's incredible status is known as the "overview effect", that realisation that we live on a planet that is a "shared home", and it instills a sense of awe.[5] For the rest of us, photographs of the Earth from space remind us of how unique and special our planet is, inspiring us to realise, more than ever, that this is a truly special part of the universe that is worth caring for and treating with respect.

Some of the comments about Earth after seeing it for real from space or from images of it taken from space include:

It behoves every human being to look at images of the Earth from space, to read the testaments of the overview experiences of astronauts. To fully comprehend the miracle that the planet Earth is. To understand that despite Earth's strength as a planetary body, the health of its system as a whole is dependent on all of us coming together to make the right choices about our use of energy, resources and habitats, choices that affect not only human beings but all the many millions of other living beings this planet has given harbour to.