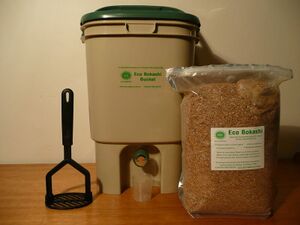 Picture of Bokashi bin and bag of Bokashi bran mix; a bokashi bin is a non-smelly compost or worm farm alternative suitable for people living in large or small buildings.

Bokashi anaerobic digestion is a method of anaerobic digestion to prepare almost ANY kitchen waste (incl. carnivorous waste) for composting (incl. directly into the earth). This makes it a very interesting candidate for handling food waste quickly and efficiently from urban sites, institutions, and other places where compost bins would be inconvenient or would otherwise attract pests. It is also a net carbon sink, since the method produces almost no greenhouse gases and can be scaled (municipally) to sequester large amounts of carbon. Variants of the bokashi method also show promise in bio-remediation.

If you live in Port Phillip Council in Melbourne, you can get a free bokashi bin (or compost bin, or worm farm) by attending their SLAHminars (Sustainable Living At Home seminars): http://web.archive.org/web/20130603231428/http://www.portphillip.vic.gov.au:80/slah.html