Tillage is the agricultural preparation of the soil by mechanical agitation of various types, such as digging, stirring, and overturning. Tillage is needed to break up/loosen of the soil, ie to improve soil structure, as well as for "primary weeding" (mechanical control) or ie to plow in soil nutrients (ie lime, fertiliser, ...). Loosening of the soil needs to be done in any situation where the soil has become consolidaded (ie after rain, after winter in temperate countries -time the tillage operation carefully-, ...) Primary weeding is only needed with new agricultural fields, after winter, ... (situations where there are huge amounts of weed/plants that need to be removed, something which is uneconomical to do by hand). 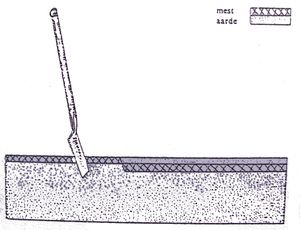 Examples of draft-animal-powered or mechanized work include ploughing (overturning with moldboards or chiseling with chisel shanks), rototilling, rolling with cultipackers or other rollers, harrowing, and cultivating with cultivator shanks (teeth).

Ploughs and harrows are well suited for draft animals and are generally the only tool that is still ligh enough to be pulled by animals.

Cultivators, rototillers, rollers and cultipackers are more efficient tools for tilling, yet can only be used by machines. This because they are very heavy, and sometimes also need to be powered (ie cultivators generally have an axle that needs to be powered by the motor of the vehicle that tows it).

getting a good sowing or planting bed. By loosening the soil and then pressing it, we obtain a good air/water ratio. Simultaneously we dig under organic fertilization. A good tillage is the basis for a good crop growth. Plants that are root well also have a good growth.

This has as a purpose to loosen the soil deep enough, as required for the plant to grow. Simultaneously, organic matter is dug under.

The soil is cut, broken and reversed. After the plowing, additional operations are still required. A normal plowing depth is 25 cm. For heavy soils, this is a good manipulation that is best done before winter so that the soil can freeze out and is then much crumbleable in spring.

Newly-found farm experiments show that much nutrients evaporate and leak out of the soil if it is plowed. Suggestion claims that it is unneccessary and if alternative methods is used to control weeds, the yield can be larger without plowing. (I can only find information about this in swedish)(here is one googletranslated article)[1]

When digging out (manual or machinal), each soil block is dropped separately. This creates an extremely open structure. Here again finishing manipulation steps are needed.

This is an intermediate form of digging out and milling. With this step, the soil is put sowing or planting-ready in one single operation. Because the soil is usually somewhat too loose, this manipulation is often done when the planting is imminent.

This is a very superficial treatment in which the soil is crumbled very finely. This should be applied just before sowing or planting. There is a threat on somewhat more heavier soils of soil consolidation after a rain.

These are tools that rake thesoil, and while doing so, brake the large soil clods and crumble them. Simultaneously, the crumbled soil is pressed. Several tools such as the vibrating teeth cultivator and the rotorharrow are used. This manipulation generates an ideal sowing bed.

A harrow has fine, shallow teeth that loosen the upper part of the soil and cut them.

Simultanuously with putting the soil sowing ready, the soil is rolled to attain a adequatly consolidated sowing bed. When planting, the sowing bed needs to be less pressed.

Here, we loosen the upper centimeters of the soil with a a hoe or a hoe machine. The purpose of hoeing is to aerate the soil, allowing oxygen to reach the roots (after a heavy rain) and allowing the soil to dry out less quick. It is also the ideal way to mechanically remove the weeds. The weeds are cut just below the ground surface.

Under wet soil conditions, the soil can not be tilled regarding to possible deterioration of soil structure.