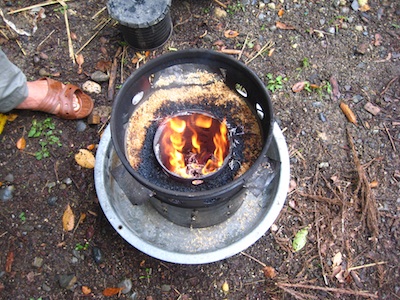 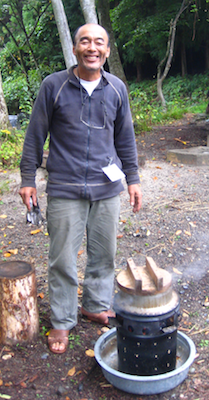 This Rice cooker was invented and developed by Mr. Usui san of Nagano, Japan, after much experimenting.

The main advantages of this rice cooker are:

This rice cooker can only be used out-doors. It is similar in action to the sawdust stove, but unlike the sawdust stove the rice-hulls do not require compaction and it is intended specifically for rice cooking, although probably it can be used to cook other things.

Where is it relevant?[edit | edit source]

This cooker is relevant for any place where rice is a grown and is a staple of the diet (most of Asia, as well as parts of Africa and South America). Using rice hulls not only turns a regular waste into a resource, it also reduces the dependency on wood as fuel, and thus the environmental stress that is caused by cutting trees for wood (as often happens in developing countries). Rice hulls also compares favorably to other fuel types in terms of its renewability and embodied energy.

The cooker consists of a smaller perforated inner can, which is nested inside a larger perforated outer can. The space between the two cans is then filled with rice hulls. Once the hulls are lit, air suction naturally occurs through the holes in the outer can, via the rice holes and feeds the fire in the inside can. 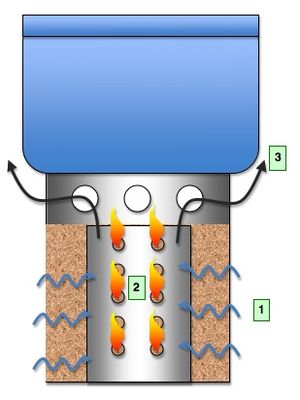 1: air coming in through rice hulls. 2: burning occurs in the inner can. 3: smoke escapes from the top.

How to use it[edit | edit source]