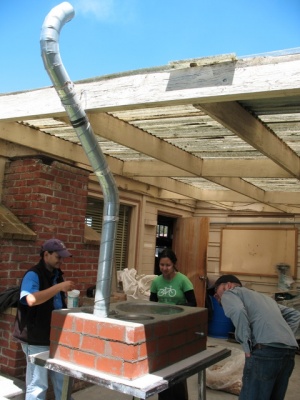 A Patsari cookstove, nicknamed the Schatzari was built at the Schatz Energy Research Center (SERC) laboratory on May 27, 2010.

The purpose of this Appropredia page is to describe the construction process of the Patsari, with a particular focus on the modifications and deviations that were made from the document, "Estufa Patsari; Manual de Construccion (EPMC)." This page is intended to serve as an amendment to the construction manual that was published by the Grupo Interdisciplinario de Tecnologîa Rural Apropiada (GIRA), and should not be considered a stand-alone document. The construction process marks the beginning of a collaboration between GIRA and SERC. The goal is to use the stove as a tool to develop research projects aimed at investigating the relationship between stove combustion design parameters and emissions of black carbon (BC). BC is a major contributor to global warming and accelerated glacial melt. Furthermore, emission of BC inside the home is a public health concern because of its role in causing chronic and acute respiratory diseases in groups that experience significant exposure, particularly in the Global South. This will add to the scientific knowledge base of biomass cookstoves, as they relate to local and global scale emissions inventories of BC and co-pollutants. Past studies have shown that the Patsari's combustion chamber design increases combustion efficiency, reduces emissions of BC and other particulate matter, and decreases consumption of fuel wood.

The latest version (as of 5/27/10) of the EPMC was followed closely. Any deviations from the manual were made to accommodate the difference between materials procured in Arcata versus Mexico, as well as to accommodate future stove testing. The primary modifications were the addition of air supply lines into the combustion chamber, as well as ducts for the insertion of thermocouples into various locations inside the stove.

As specified in the EPMC, a heavy-duty metal table (130cm x 99cm x 78.5cm) capable of supporting several hundreds pounds was procured to serve as a stove base. The table was sanded and cleaned to eliminate rust.

A mold was built from plywood to ensure proper exterior stove dimensions. The mold dimensions (107cm x 70cm x 29cm) were slightly larger than specified in the EPMC, as advised by the GIRA team.

Since local bricks were slightly smaller than that normally used, a brick configuration was designed to fit the mold with the smaller bricks. This required cutting bricks and dry fitting them in the mold through a trial and error process until proper stove dimension were achieved. Since local sand was courser than that normally used, a sieve was built to filter out small rocks (approximately > 1/8" wide).

Bricks were arranged inside the mold and photographed to preserve the exact brick configuration during the brick laying process. It should be noted that the exterior dimensions of the stove are not important so long as the stove can accommodate the combustion chamber interior dimensions of 36cm x 22cm x 12cm, and the cooking surfaces. 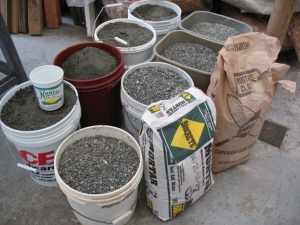 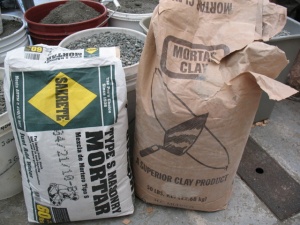 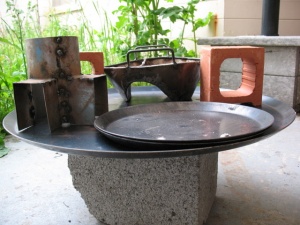 The following tools and materials were manufactured in Mexico and brought by the GIRA team:

Day 1: On Wednesday May 26, 2010, members of GIRA arrived at SERC to take part in a planning session for the following day's stove construction process. GIRA members observed that due to regional differences in clay, sand, and mortar, sample clay mixtures should be made to determine the optimal mixture. To determine this, different ratios of clay, sand, and mortar were made. The following day, the samples were observed and it was determined the most suitable ratio was 1 part clay, 2 parts sand, and 2 parts mortar (1:2:2).

Day 3: On Friday May 28, 2010, the chimney was installed and the stove was demonstrated by preparing a batch of quesadillas. 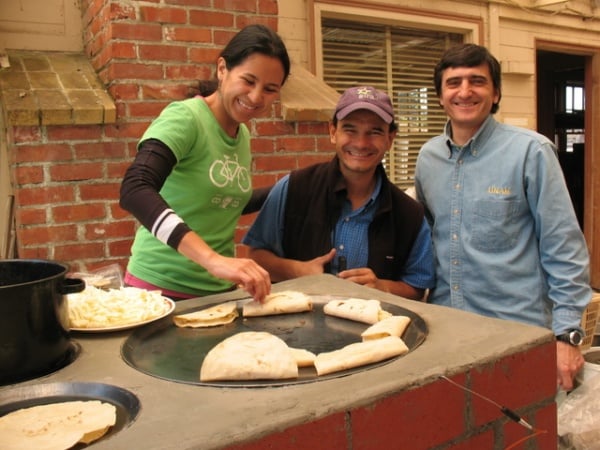 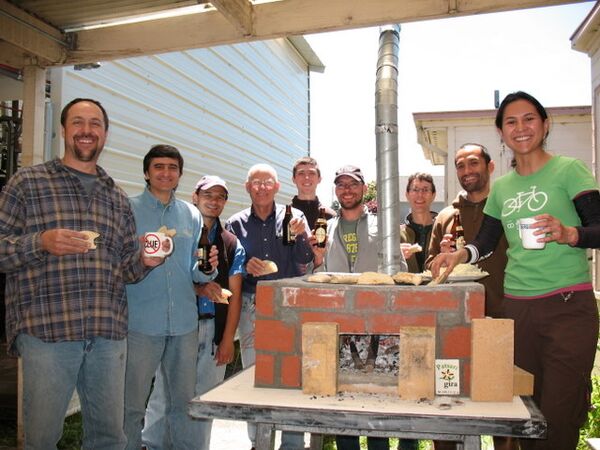 Page data
Retrieved from "https://www.appropedia.org/w/index.php?title=Schatzari_Cookstove&oldid=619739"
Cookies help us deliver our services. By using our services, you agree to our use of cookies.
Categories:
About Appropedia · Policies · Contact · Content is available under CC-BY-SA-4.0 unless otherwise noted.