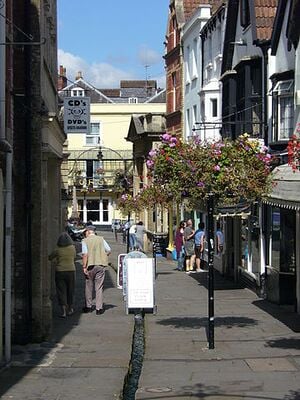 Frome ( (listen) FROOM) is a town and civil parish in eastern Somerset, England. The town is built on uneven high ground at the eastern end of the Mendip Hills, and centres on the River Frome. The town, about 13 miles (21 km) south of Bath, is the largest in the Mendip district of Somerset and is part of the parliamentary constituency of Somerton and Frome.

Frome was one of the largest towns in Somerset until the Industrial Revolution, and was larger than Bath from AD 950 until 1650. The town first grew due to the wool and cloth industry; it later diversified into metal-working and printing, although these have declined. The town was enlarged during the 20th century but retains a large number of listed buildings, and most of the centre falls within a conservation area. In the 2011 census, the population was given as 26,203.

The town has road and rail transport links and acts as an economic centre for the surrounding area. It provides a centre for cultural and sporting activities, including the annual Frome Festival and Frome Museum.

In 2014, Frome was named by The Times the "sixth coolest town" in Britain. It was shortlisted as one of three towns in the country for the 2016 Urbanism Awards in the 'Great Town Award' category. In its 2018 and 2021 report on the "Best places to live in the UK", The Sunday Times listed Frome as the best in the South West. In April 2019, Time Out listed Frome among 15 of the best weekend breaks from London.

There are a number of public green spaces within the town, both formal and informal; some are substantial such as the Victoria Park or the Rodden Meadow; others may be smaller but are valued within their neighbourhoods, such as Weylands or the Dippy. Many of the public spaces have organised litter picks, arranged by local community groups. W

The civil parish of Frome has adopted the style of a town, and there is a Town Council of 17 members. In May 2019 all 17 council members elected were members of the Independents for Frome party (ifF). W The Town Council has been involved in a number of sustainability orientated initiatives, see subsequent sections.

Two cycling clubs operate in the town: the Frome CTC, nicknamed the Coffee and Tea-Cake Club, and the Frome & District Wheelers. E-bikes are available for hire, courtesy of a Town Council initiative. W

The Town Council installed the first community fridge in the country in May 2016; 90,000 items a year have been saved from landfill. This was joined by a community larder in October 2017.

Frome has an online market, the Food Hub launched in November 2018, where sustainable supplies from local farmers and food producers can be sourced, either for collection or by delivery (central Frome only). W

A project, Compassionate Frome, to combat loneliness in the town was established by a local GP in 2013. It is claimed that it reduced emergency hospital admissions by 17% over three years when in the rest of the county they rose by 29%. W

In early 2015, the UK's first high street Library of Things was set up in the town. In one year (May 2018 to April 2019), use of the shop helped avoid 92 tonnes CO2e of greenhouse gas emissions, saved 117,000 kg of material usage and avoided 10 tonnes of manufacturing waste. In the same period its members collectively saved £66,800 by borrowing instead of buying items. W

The Town Council employs a resilience officer, one of only two at town council or parish level in the country; a principal task is to support the strategic priorities for transport. Initiatives include a public-access car club, operated by the social enterprise Co-wheels. Electric charging points are available at the Cheese and Grain, the Town Hall, the Football Club and Frome Medical Practice. W

Frome is an accredited Walkers are Welcome town since 2018. An extensive list of walks and guides is available. Guided walks on a range of topics are now online. W