From Appropedia
Redirected from Bioenergy 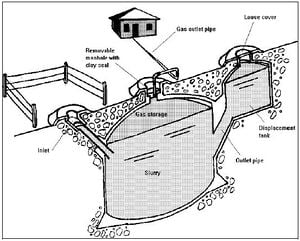 Biofuel is a term used to describe fuel sources that are derived from easily regeneratable animal or plant-based resources. Biofuels are categorically different from fossil fuels, as biofuel production is not based on the anaerobic decomposition of buried organic matter. Furthermore, fossil fuel deposits take millions of year to form and are a naturally occurring phenomenon while resources for biofuel production are usually considered renewable and are typically representative of the bi-product from some other production process. Biofuels are thus a form of closed-loop recycling recycling, as the waste product from some production process is re-appropriated in to fuel for the process itself. It should be noted that although biofuels vary greatly in nature from fossil fuels, they are both a form of indirect solar energy; the initial energetic input stored in these fuels originated from the sun and was captured via terrestrial primary production processes, or photosynthesis.

Biofuels can be divided in to two categories of first-generation and second-generation:

Residual biomass can be re-appropriated without any primary treatment processes (i.e. the use of solid biomass) or be converted into various non-solid fuel forms; these forms are referred to as biogas and liquid biofuel. The purpose of such refinement processes is to improve the quality, specific energy content, transportability, etc., of the raw biomass source. It also allows for the capture of gases, which would otherwise be released in to the atmosphere, during natural biomass degradation processes. An example of this is the release of methane from anaerobic digestion in biomass waste or stockpiles.[2] These two forms of biofuel differ in there uses and applications; for example primary uses of biogas include cooking and lighting in a number of countries. On the other hand, development in liquid biofuel production has been driven by an ever-increasing societal need to displace fossil fuels as the default fuel source.

Within the context of acknowledged and growing anthropogenic impact on the global energy system, there has been notable movement towards cultivation of energy crops specifically for the production of biomass-derived fuel. These developments are taking place globally, across Europe, the United States as well as in several developing countries; as the human population continues to accelerate towards both complete extraction of fossil fuels, as well as catastrophic atmospheric CO2 levels, the need for integrated energy supply options has become increasingly overt. This need for supplementary and renewable fuel sources has thus catalyzed development of biofuel technology and will furthermore be the basis for which biomass re-appropriation will reach its full potential as an energy source.

In the following sections, a number of liquid biofuel forms will be outlined as well as their applications, and the conversion technologies used to derive them.

There are two primary points of environmental concern, in relation to biomass-based energy derivation. The first point of concern is the potential for poor land management practices that are so often associated with any type fuel production. Examples of potential degrading production processes include large-scale implementation of mono-crops and the use of various chemical compounds to stimulate growth. Considerations specific to biofuel crop harvesting include the removal of plant residual material that would otherwise be broken down and increase the organic matter contentions and can furthermore contribute to greenhouse gas emissions through losses of soil carbon.[3]

However, land degradation and deforestation that could potentially be fostered by production of biofuels can be circumvented via cohesive and regulated land management policy. Furthermore, integration of non-conventional farming methodology, such as companion planting, IPM and conservation tillage into biofuel production policy could further reduce the potential for negative environmental impact associated with modern large-scale agricultural practices.

The second point of concern relates to the inversal nature of first generation fuel production and food production. This relationship was noted in the pervious sections. It arguable that such prioritization is not necessary, as much of the biomass requirement for energy production can be met through the re-appropriation of production bi-products (waste) or food industry residual material; you will remember that this form of biofuel is referred to as second generation. Policy infrastructure should thus be created with this consideration in mind, and limit the degree to which arable land and other production inputs can be employed for first generation biofuel production. Benefits to this limitation are two-fold, as it prevents undue stress on the environment related to biofuel production and restricts the degree to which this production can be prioritized over food production. For a more in depth outline of appropriate policy infrastructure, see.[4]

The use of crops that are native to the region can also provide part of the answer. In addition to this, the exact place (and the current use of the location -ie food production, CO2 already locked in the soil, ...) where the crops are planted also matters. According to Wouter Achten of KU Leuven, biofuel-crops are best planted in CO2-poor soils and which are currently not used for agriculture. The first is for obvious reasons: by requiring the farmer to fertilise the soil with CO2 he locks away part of the CO2 in the atmosphere. The downside however is that extra fertilisation (and thus an increased cost) is required. The second is for less obvious reasons: if the land is used for agriculture, the crops that were planted need to be relocated. This could mean that there is an extra CO2-cost in transport (crops need to be transported further). This is known as ILUC.

Localised decentralised biofuel production from feedstock grown using sustainable agricultural practices been shown to offer part of a sustainable energy portfolio. A good example is for example rapeseed. This crop creates both biofuel (oil) as animal feed (the rest of the plant).

There are other environmental concerns related to each fuel that need to be kept in mind, such as toxic emissions and production of tars and soots.[5][6][7][8][9]

Biofuels are not made from petroleum; not purchasing petroleum products allows you to avoid supporting business practices such as oil drilling that are harmful to the environment and human rights.

Pollution is any byproduct that cannot be fed back into the closed-end system. For biofuels (except for biohydrogen), this includes particulates and unburnt hydrocarbons (smoke), oxides of nitrogen, carbon monoxide, and a few others. These are typically much lower level than when fossil fuels are combusted, but they remain a problem, particularly for the human health (ie may cause respiratory problems, certain cancers, ...).

Zero-emissions fuels do not have this problem, yet are more difficult to use in practice, and are also more expensive.

Note that what is pollution for one technology may be the biofuel in another. For example, if wood is heated anaerobically (with limited oxygen), it produces carbon monoxide, which is normally considered a pollutant, but if collected, can be burnt as a biofuel.[10]

'First-generation (or conventional) biofuels' are biofuels made from substances in crops (ie sugar, starch, and vegetable oil) that can be used for human consumption. Due to this, the production of fuel from these crops effectively creates problems in regards to the global food production.[11][12]

Solid biofuels are plant parts from crops grown for direct combustion. It includes wood, sawdust, grass trimmings, charcoal, agricultural waste, and dried manure. Some primary bio-energy feedstocks include industrial hemp, switchgrass and Miscanthus. They can be used as is or pressed into plates for easier incineration. Miscanthus or elephant grass generate a very high amount of dry matter.

These include bioethanol, biomethanol and biobutanol. See Alcohols as fuel.

With most biofuels the incompatibility with available engines provides an additional barrier to the adoption as reliable operation requires expensive engine modifications. 'Flexi-fuel' engines are available in some regions, commonly spark ignition engines able to run straight petrol(US-gas) or petrol/ethanol blends. Additives (bio ethers) can be applied to fuels to improve their performance.

Use in heat engines[edit | edit source]

It is possible to use biofuels in several heat engines, including internal combustion engines (diesel, gasoline) and Stirling engines. Reliability and performance of the engine will depend on:

It is possible to use a wide range of liquid biofuels in a diesel engine, most commonly lipid based biofuels are used either in their pure form, plant oil, or transesterified as biodiesel. Diesel engine fuel delivery can be altered to suit the fuel. See also: http://en.wikipedia.org/wiki/Diesel_engine

Some liquid biofuels as ethanol can be used, oil-based biofuels can't be used though. Gases can also be used (ie wood gas (if filtered), biohydrogen, biogas and pure methane) See http://en.wikipedia.org/wiki/Internal_combustion_engine

Use in Stirling engines[edit | edit source]

Use in steam and fuel-powered turbines[edit | edit source]

Fuel-powered turbines can be run on liquid biofuels as oils, ethanol, ... as well as some gas-based biofuels (ie biohydrogen, methane). Gas-based biofuels as wood gas and biogas are potentially also possible, but could give problems with fouling (due to tar, ...) Steam turbines (bladed-rotor, Tesla, ...) can run on all biofuels (solid, liquid, and gas-based biofuels). Fouling isn't a problem here (as opposed to fuel-powered turbines) as the heater chamber is generally separated from the chamber housing the turbine blades. Steam turbines however do require an additional energy conversion (fuel to steam) meaning there is some additional energy loss. The incineration of the fuel can btw be done using a pulse jet engine to increase efficiency, and to decrease fouling in this separate heating chamber (although it isn't a big problem) even more.