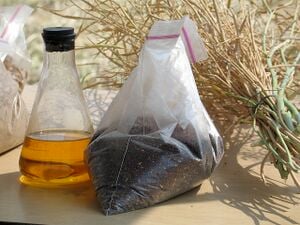 Biodiesel is a biofuel made from pure plant oil which has been treated with chemicals. An alternative approach for making biodiesel that does not involve the use of chemicals for the production also exists. This approach makes use of genetically modified organisms.[1][2] Biodiesel can be used in nearly any diesel engine, with little or no engine modifications. Unlike straight vegetable oilW, it can be used as fuel (new, or waste frying oil) in any engine. 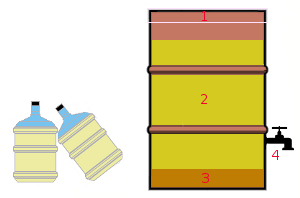 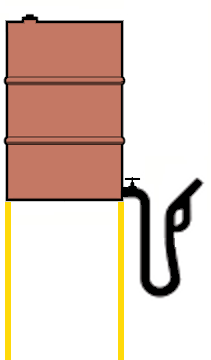 Biodiesel can be made from any[verification needed] fat or oil, such as:

Biodiesel can be produced from straight or cleaned waste vegetable oil. This is not complex and can be done chemically on a small scale. The cleaning of waste vegetable oil is done by straining the liquid trough a muslin, and then separating out the oil by means of a tap or siphon. Additional heating (to 60°C) and agitation (circulation of the oil) is then required to remove any water that may be in the WVO (known as "drying").

The vegetable oil is converted to a useable fuel by combining ethanol or methanol with a catalyst and adding this mixture to the straight or cleaned waste vegetable oil. Small amounts of potassium hydroxide or sodium hydroxide (commonly called lye or caustic soda, which is used in soapmaking) are used as the catalyst material. After this, the SVO/WVO is dried again by heating it to 60°C.

Glycerine then separates out as the reaction takes place and sinks to the bottom of the container. This allready removes the greatest component that gums up the engine. After this an additional step (bubblewashing) is done to remove smaller contaminants. This way, even a modern (direct injection) diesel engine can be run on it. The glycerine can be used as a degreasing soap or refined to make other products.

An alternative approach that does not involve the use of any chemical for the production involves the use of genetically modified organisms.[4][5]

Biodiesel can be made DIY at 18 pence per liter whereas petrodiesel costs 1.32 pounds per liter in Europe.[6]

Biodiesel produces less particulates than petrodiesel and is thus much less hazardous to the health of the population, particularly those living in urban areas exposed to significant levels of diesel pollution.[verification needed]

A major disadvantage is the huge amount of work involved. Those that are not afraid of modifying the Diesel engine (to indirect injection) may opt to do this instead. This, in order to get rid of the never-ending work of converting the vegetable oil to biodiesel. Another option (for those that are not yet in the possession of a Diesel engine) is to use an entirely different engine which can run on even the dirtiest fuels. Such engines are Stirling engines, 2-stroke Diesel engines,...

Page data
Retrieved from "https://www.appropedia.org/w/index.php?title=Biodiesel&oldid=649881"
Cookies help us deliver our services. By using our services, you agree to our use of cookies.
Categories:
Maintenance categories:
About Appropedia · Policies · Contact · Content is available under CC-BY-SA-4.0 unless otherwise noted.