From Appropedia
Redirected from Wood gas

Wood gas is a fuel gas that can be used for furnaces, stoves, and vehicles. During the production process, biomass or related carbon-containing materials are gasified within the oxygen-limited environment of a wood gas generator to produce a combustible mixture. In some gasifiers this process is preceded by pyrolysis, where the biomass or coal is first converted to char, releasing methane and tar rich in polycyclic aromatic hydrocarbons.

In stark contrast with synthesis gas, which is almost pure H2/CO mixture, wood gas also contains a variety of organic compound ("distillates") that require scrubbing for use in other applications. Depending on the kind of biomass, a variety of contaminants are produced that will condense out as the gas cools. When producer gas is used to power cars and boats or distributed to remote locations it is necessary to scrub the gas to remove the materials that can condense and clog carburetors and gas lines. Anthracite and coke are preferred for automotive use because they produce the smallest amount of contamination, allowing smaller, lighter scrubbers to be used.

This article deals around the use of wood gas in internal combustion engines. 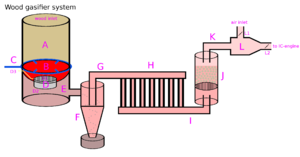 Questions --> is a complete system more efficient than separate units ? From the text at http://web.archive.org/web/20140726013157/http://www.gekgasifier.com/forums/showthread.php?t=22, and given the fact that wood gas has a low energetic value on itself, it seems so, but why ?

The process of biomass gasification is distinctly different form that of biogas production. Gasification is the process by which solid biomass materials are broken down using heat to produce a combustible gas, commonly known as producer gas (or wood gas). Common feedstocks for combustion include wood, charcoal, rice husks and coconut shells.

Page data
Retrieved from "https://www.appropedia.org/w/index.php?title=Wood_gas_as_fuel&oldid=633777"
Cookies help us deliver our services. By using our services, you agree to our use of cookies.
Categories:
About Appropedia · Policies · Contact · Content is available under CC-BY-SA-4.0 unless otherwise noted.