In general, there are 2 sources of traction power: from animals, and from machines (engine-powered). Due to the work of Fernando Funes-Monzote in Cuba [1][2], we know that we can decrease the energy needs 25-fold[3]. However, a better balance can (possibly) be found by using more efficient machinery rather than animals. It is true that ie conventional tractors spend far too much energy compared to ie animals; however, I believe that this is due to their dimensioning. As noted in the documentary, they can not cultivate crops that are placed close together, and they are also badly designed, resulting in a huge efficiency drop. However, with better design, these downsides could be eliminated. Animals for example generate very strong greenhouse gases (methane), require a lot of food vs the work they do (see the article I made at http://en.wikipedia.org/wiki/Mechanization#Mechanical_vs_human_labour ) and are also a risk regarding ie public health (they spread disease, work as a vector, ...) As such, I think it is best to eliminate their use as an agriculture instrument (as well as their use as a food themselves) altogether. I believe that in the very near future, they can be replaced with smaller (automated) machines. Already, there are some pruning and weeder robots (ie Ruud), and combined with well known techniques such as crop rotation, companion planting, the use of organic pesticides (see link in forwarded message below), ... they can easily be discarded.

However, besides the ecologic and economic advantages over time, there is still the issue of the primary purchase cost, which would be much higher than that of a horse. Thus, the use of draft horses, oxes, ... for now or simply as a temporary solution (until they attained the money to built a traction engine) seems advisable. (Some more research is needed on lifetime cost, including purchase cost small & large draft horse/ox, purchase cost AT traction engine, maintenance & feed/fuel costs, offset by value of manure produced by an animal.) The reason why the purchase cost (and not the costs on long-term) may be less is because animals can be propogated at practically no cost at all. On the long-term however, the efficiency losses (animals consume more calories for a given task than machines) eliminate benefits attained from the reduced purchasing cost.

Several animals can be used: draft horses, ponies, oxes, water buffalo... (other animals such as llamas & camels may be physically strong but have a difficult temperament) Depending on the animal chosen, cost-efficiency will increase/decrease. --> which animal is most cost-efficient ? Depending on the context (region, wet or dry cultivation...) several animal breeds seem most useful: horse breeds

According to the oil drum, a single draft horse or mule could easily be sustained on 5-10 acres (that's hay/pasture/grain) --> per year ?. (see comment 1: 5 acres, comment 2: 10 acres, & supposedly 2,5 acres with very good soil/very high yields ) Depending on the region, the space/field require can be nothing (some countries simply grant hectares of space to anyone that bothers cultivating it), to very high costs (ie in "developed" countries, costs can be easily 25000 - 50000 euros per hectare ). Even after attaining the ground, the fields still need to be maintained, fertilised & watered (ie in periods of draught), ... The fertilisation costs can be eliminated if the feces of the animals is collected (ie in a bag) for composting, and after composting, spread on the field. Composting of the feces is definitely needed since, as is, it is a very bad fertiliser (too much nitrogen, no carbon). Also, compostation needs to be integrated for health reasons (ie destroys most of bacteria, ...). Humanure can be used to increase the efficiency of the field. This can be done using composting toilets (e.g. see design at Composting toilets#Construction and Composting toilets#Gallery).

There are also the costs of the harness - depending on the lifespan, this may represent a combination of purchase and maintenance costs.

The cost will also vary depending on the use of the animal: ie an animal that works continuously will be more cost-efficient (as the animal requires a minimum of food as well simply to get by the day and not do any work at all). However, even the most trained animal can only work for ? hours; also work is not always available: it varies for the farmer during the year.

Some very annoying features of animals are that they are unpredictable; even "friendly" draft horses can get spooked and kill people when they do. Draft horses however have less the tendency to kick with the back feet.[verification needed]

The animal will need to be cared for daily; ie watering, feeding, ... Besides providing the feed, the farmer will also need to calculate the energy expenditure of the animal, based on the work done, and the hours it worked. After this, the feed quantity needs to be changed and the feed needs to be offered.

I posted something at http://en.wikipedia.org/wiki/Talk:Horsepower#Horsepower_from_a_horse (despite a bit confusing, it contains some very important questions on this subject). Appearantly, temporary power output can be as high as 30HP, and even basic HP seems higher (1,5HP). 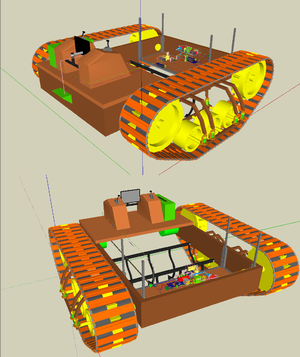 The AT traction engine ("IC" version) worked out in 3D

As mentioned above, the machinery used today (ie conventional "tractors") isn't cost-efficient, but machines in general are (if they are built appropriately).

A purpose-built traction engine, based on the efficient "1902 Ivel Agricultural Motors Ltd traction engine" (see http://en.wikipedia.org/wiki/Talk:Traction_engine#oldest_traction_engine , http://en.wikipedia.org/wiki/Traction_engine , http://web.archive.org/web/20100421115527/http://www.classicmachinery.net:80/forum/tractors-f41/ivel-agricultural-motor-t3226.html) might be suitable. Like the Ivel, the traction engine is however best not steam-powered since the parts required for this would be quite heavy and thus result in a economically unuseful project. The Ivel for example had instead, a (low-powered; 2HP, see below) internal combustion engine.

The AT traction engine shown on the right (called the "IC-version" though actually a IC-EM hybrid version) uses 2 electric engines (electric induction engine, squirrel-cage type) and incorporates a battery, which will be run on energy produced from the combined IC engine and Stirling engine (running on wood gas). The IC + Stirling engine can be placed on the soil and connected to the AT Traction engine using an electric cord (this to preserve power by reducing the weight of the vehicle). Besides placing the engine on the soil, the control booth too is placed on the soil, and the vehicle is controlled remotely.

This setup would be make it lightweight (engine not carried along on the field, nor is a person (automated or remote-controlled) and thus, as efficient as possible). The reason why the IC engine running on wood gas is not kept on the vehicle, and why the wood gas is incinerated on the soil is that the wood gas lines can't be long, but electrical wires can.

Besides an IC (actually IC-EM hybrid) version, there is also an EM-version which is powered by batteries (again also removable from the vehicle). The batteries can however never be disconnected. A long enough electric cord is foreseen. This would allow to place the energy store next to the field (ie for tasks as ploughing) and power the traction engine via the electrical wire. This system would thus again reduce the energy consumption as a great amount of extra weight doesn't need to be carried along on the vehicle during the ploughing/other agitation of the soil.

The only disadvantage of the system is that batteries take a long time to charge (several hours). A way around this problem is to use a capacitor instead or simply run the vehicle straight on the mains electricity grid. This can for example be done when the vehicle has arrived at the agricultural field (by plugging the electrical wires to the motors into a mains electricity grid socket. If this isn't available, the batteries (after placement on the soil will need to be used instead).

An alternative is to use a pneumatic system. These do not have the energy flow restriction noted above, but then again have little energy capacity (compressed air tanks only allow the storage of a very small amount of energy). There is also the issue of the weight of a compressor and tanks on the vehicle (both need to be on-board due to energy losses due to temperature). As the compressor needs to be on-board, it can't be large/high-power and thus would still take a relatively long time to recharge, ... This makes me question this setup.

Also, the robot would need to keep track of his own location, some programs as ArduPilot could possibly be used for this. It would also need to be scaled up and toughened up (see also: https://www.appropedia.org/Appropedia_talk:Village_pump#Dimensioning_.28AT.29_caterpillar_tracks ) Some of the DF Robotshop designs such as the Superdroid/Dr. Robot (see http://www.robotshop.com/tracked-development-platforms-1.html ) could possibly be used together with the DFRobotshop Rover Arduino control system.).

I'm also unaware how much HP we'll require for the traction engine (older traction engines had some 2HP, or the power of 2 horses ?), but I'm unaware whether this is actually enough. In the Edwardian Farm, it was enough (although the result was not amazing), and we can even beef it up easily to 12HP (a regular lawnmower engine has 12HP), but even then I'm still not sure whether that will be enough for any situation. This as (2) horses can generate upto 30 HP (see the wikipedia talk page) at least momentarily; so horses can actually pull out the plough if it gets stuck ie in very clayish soil, ... whereas a lawnmower-powered traction engine "may" not.

Regarding the farm implements; these should be conform to no-till farming. The implements would be detachable, and probably mounted beneath the traction engine.

Page data
Retrieved from "https://www.appropedia.org/w/index.php?title=Traction_power&oldid=649875"
Cookies help us deliver our services. By using our services, you agree to our use of cookies.
Categories:
Maintenance categories:
About Appropedia · Policies · Contact · Content is available under CC-BY-SA-4.0 unless otherwise noted.