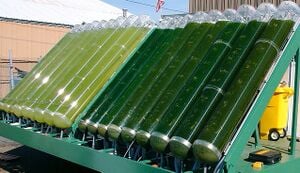 Algae fuel, or algal fuel,[1] is a second-generation biofuel made from algae. Compared with other second generation biofuels, algae are relatively high-yield high-cost (30 times more energy per acre than terrestrial crops) feedstocks to produce biofuels. Since the whole organism converts sunlight into oil, algae can produce more oil in an area the size of a two-car garage than an entire football field of soybeans.[2]

Nowadays they cost $5–10/kg and there is active research to reduce both capital and operating costs of production so that it is commercially viable.[3][4][5] According to René Wijffels the current systems do not yet allow algae fuel to be produced competitively. However using new (closed) systems, and by scaling up the production it would be possible to reduce costs by 10X, upto a price of 0,4 € per kg of algae.[6]

Algae can potentially thrive on exhaust gases from power plants which run on fossil fuel (or any fuel that is burnt to product carbon dioxide. The algae grows faster thanks to the high concentration of carbon dioxide, which would otherwise be emitted as a greenhouse gas in the atmosphere, increasing climate change.

However, it does appear to have greater environmental impact than other forms of biofuel.[7]

It can possibly also be used as a secondary wastewater treatment in sewage systems. This would then be similar to the method described by Bas Ibelings (of NIOO-KNAW) for its Algae toilet.[8]

Companies working on producing biofuel include:

A number of universities and businesses are working on algal fuel for aviation - algae jet fuel. These include: the companies Solazyme, Honeywell UOP, Solena, Sapphire Energy, Imperium Renewables, and Aquaflow Bionomic, along withArizona State University and Cranfield University.

The key difficulties in the production of oil from algae are:

The discussion on the cited Oil Drum article refers to problems in the thermodynamics, i.e. in the basic energy equations, suggesting that algae fuel may never be affordable. Calculations by Odum are among the references for this argument.[verification needed]

Page data
Retrieved from "https://www.appropedia.org/w/index.php?title=Algae_fuel&oldid=634753"
Cookies help us deliver our services. By using our services, you agree to our use of cookies.
Categories:
Maintenance categories:
About Appropedia · Policies · Contact · Content is available under CC-BY-SA-4.0 unless otherwise noted.