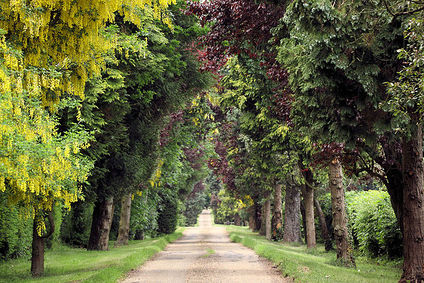 Wikipedia: Bedford Green Wheel: a project to build on the existing network of traffic free paths and quiet routes for cyclists and walkers. This network will run around Bedford, England, and includes 'spokes' linking into the town centre. The network will link parks, nature reserves, countryside and homes. This project is part of Bedford Borough Council's Green Infrastructure Plan 2009.

Waterways: The River Great Ouse links Bedfordshire to the Fenland waterways. As of 2004 there are plans by the Bedford & Milton Keynes Waterway Trust to construct a canal linking the Great Ouse at Bedford to the Grand Union Canal at Milton Keynes, 14 miles (23 km) distant. [1]

The vale is traditionally a brickmaking area, but brickmaking industry has been running down since the 1970s. It has left a large amount of spoiled countryside containing several large empty pits some of which have now been converted into lakes. The Forest of Marston Vale is one of twelve of community forest projects in the United Kingdom. It was initiated by the Countryside Agency and the Forestry Commission, in partnership with Bedfordshire County Council, Mid Bedfordshire District Council, and Bedford Borough Council. The total area covered is 61 square miles (158 km2), but most of this land is in private ownership. There are incentives for landowners to plant trees, and the target for community forests in general is to reach 30% tree cover.

The principal public open space in the Forest is Marston Vale is the Millennium Country Park which covers 2.5 km2 (1 mile2) and was opened in 2000. The park features several lakes including the large Stewartby Lake and extensive wetlands. There is a visitor centre called the Forest Centre, which has a Lakeside Cafe, shop, toilets and bike rental. According to the official website the park attracts around a quarter of a million visitors a year. There are plans to create a larger park of over 3 square miles (7.8 km2) to the east of Bedford, which will be called Bedford River Valley Park. W

The way ahead for funding parks and green spaces? [3] December 4