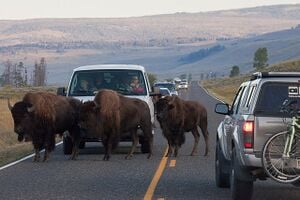 The U.S. state of Wyoming faces a broad array of environmental issues stemming from environmental changes including species introduction, endangered species, global climate change, and natural resource extraction. These changes have led to varying ecological harm to forests and natural species of wildlife that call Wyoming home. Within the state organizations and governments are working to combat these environmental threats and restore balance to the ecology. Wikipedia's Environmental issues in Wyoming article details several major ecological disasters within the state while also describing the steps that are being taken by local governments, organizations, and groups to prevent future disasters.

From Wikipedia:Climate change in Wyoming

On a per-person basis, Wyoming emits more carbon dioxide than any other state or any other country: 276,000 pounds (125,000 kg) of it per capita a year, because of burning coal, which provides nearly all of the state's electrical power.

Wikipedia: Solar power in Wyoming, Wind power in Wyoming: Wyoming has one of the highest wind power potentials of any United States (U.S.) state. Wyoming's geography of high-altitude prairies and broad ridges makes the state an ideal site for the development of wind resources. Other factors that positively affect Wyoming's wind power development potential are the high percentage of land owned by the federal government, the low population density, and the historical importance of the mining and energy sectors to the state's economy. A chief disadvantage to large-scale wind power production in the state are Wyoming's relative distance from major population centers, and the lack of transmission capacity.

Energy Data & Statistics for Wyoming from the U.S. Department of Energy