The focus of this article is US-wide or large scale events which have the potential for large scale active and participatory involvement by community groups and active citizens. They'll tend to be free or low cost events. 2016 dates unless otherwise shown.

If you would like to suggest something for this page but are unsure how to edit it, please feel free to put your suggestion on the talk page. A similar page focuses on Global events: International sustainable community events

1 - March 28, 2015 - RecycleMania W. RecycleMania is a friendly competition and benchmarking tool for college and university recycling programs to promote waste reduction activities to their campus communities. Over an 8- week period each spring, schools report recycling and trash data which are then ranked according to collected recyclables per capita, total recyclables, recycling rate, and the least amount of trash per capita. RecycleMania,

2 - May 1, 2015 - National Green Week. Schools and groups are encouraged to take this opportunity to spend time with students discussing sustainability topics and exploring ways they can make a difference. National Green Week, Green Education Foundation

24, 2015 - Arbor Day W. National Arbor Day is celebrated every year on the last Friday in April, but many states observe Arbor Day on different dates according to their best tree-planting times. The customary observance is to plant a tree. Arbor Day Dates Across America

9, 2015 - International Migratory Bird Day W. Conservation initiative that brings awareness on conserving migratory birds and their habitats throughout the Western Hemisphere. IMBD officially takes place on the second Saturday in May in the U.S. and Canada and on the second Saturday of October in Mexico, Central and South America, and the Caribbean each year. Recognizing that this date does not work well for all places or for the migratory birds themselves - sites host these programs at their convenience throughout the year. Bird Day

27, 2014 - National Day of Civic Hacking. If community engagement’s on your agenda, take advantage of National Day of Civic Hacking. Many think this is just a day for the tech community to creates shiny new apps for civic good, but it’s more than that — it’s a venue for local governments to connect with residents and discuss the function of basic services. Whether it’s government departments or community groups organizing the local events the objective remains consistent — improve public service. Code for America 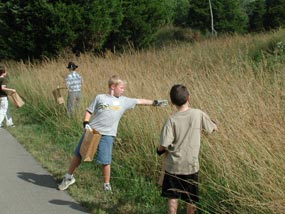 24 - Food Day W, Food Day, in the United States is celebrated annually on October 24 and oftentimes throughout the month. The Food Day initiative is now run by Food Day.org within CSPI.

15' - America Recycles Day W. Annual event. Thousands of events are held across the U.S. to raise awareness about the importance of recycling and to encourage American to sign personal pledges to recycle and buy products made from recycled materials. America Recycles Day

27, 2015 - Buy Nothing Day W, "a day for society to examine the issue of over-consumption", and kick off a season of supporting local economy and family. In North America, Buy Nothing Day is held on the Friday after U.S. Thanksgiving (a day earlier than the international day), Activities.

Page data
Retrieved from "https://www.appropedia.org/w/index.php?title=US_sustainable_community_events&oldid=600612"
Cookies help us deliver our services. By using our services, you agree to our use of cookies.
Category:
Maintenance categories:
Comments
Privacy policy · About Appropedia · Disclaimers · Mobile view · Content is available under CC-BY-SA-4.0 unless otherwise noted.
</html