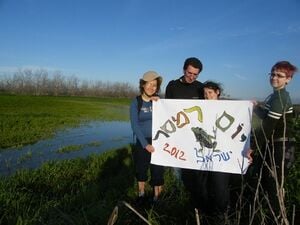 World Wetlands Day is an environmentally related celebration which dates back to the year of 1971 when several environmentalists gathered to reaffirm the protection and love for wetlands, which are the small environments of plant life and organisms found within water bodies that bring about ecological health in abundance to not only water bodies but environments as a whole. The World Wetlands Secretary Department is originally from Gland, Switzerland and in accordance to the beginning of World Wetlands Day, the Ramsar convention first attributed this recognition in "the Iranian city of Ramsar on the shores of the Caspian Sea".

World Wetlands Day is celebrated on the second day of February every year, though it was not originally celebrated until 1997. This day serves to the influence and positive production that Wetlands have had on the world and in terms brings communities together for the benefit of Mother Nature. This day, also raises global awareness because wetlands play a significant role not only in people but in the planet. Community protectors and environmental enthusiast all come together on this day to celebrate their love for nature through celebration, which recognises what wetlands have done for not only us humans, but all sorts of organisms in this world.

Over time, human construction has led to various ecological problems affecting wetlands. Overpopulation and construction has led to a decrease in environmental conservation and in total has brought upon issues to these lands. Many wetlands are being lost and ecologists claim that human should recognise the dilemma before the loss of a natural filter and conserver of the world.

Page data
Retrieved from "https://www.appropedia.org/w/index.php?title=World_Wetlands_Day&oldid=642715"
Cookies help us deliver our services. By using our services, you agree to our use of cookies.
Category:
Maintenance categories:
Comments
Privacy policy · About Appropedia · Disclaimers · Mobile view · Content is available under CC-BY-SA-4.0 unless otherwise noted.
</html