If you don't know the story of how the book was written, it's very simple: I asked on twitter.

@leashless I'm putting together a book called The Future We Deserve, open brief, 500 words, sign up at https://www.appropedia.org/The_future_we_deserve

Actually it started a day before that, when Noah Raford and I stood in a playground in Forest Hill watching his two year old interacting with a large metal duck on a spring, discussing the future.

Three days after the tweet, by the magic power of twitter and networks, 70 people had decided to write for the book, and the long, slow process of putting it together had begun. It took about three months to get 90+ pieces in. We did a Kickstarter, because I began to realize how big a job I'd gotten myself into. Many people donated, some of them hundreds of dollars, and this is part of what kept the project alive when I thought "there's no way I can get this right." I'd committed, I'd taken people's money, and I had to see it through. So I'd like to thank everybody who helped make this book a reality, authors, donors and especially those who gave both their work and money, and Kickstarter for existing.

When I sat down and did the first reading, what I discovered stopped my mind for most of a year. I went from being confident that I understood the broad narrative outline of the future to being absolutely certain that I did not. Every page or two there was a deep insight, something that once-seen could not be unseen, and gradually my implicit, unacknowledged confidence and boldness about my understanding of the future faded away into a conscious unknowing.

There is too much going on for us to hope to control.

Cat Lupton got me out of this rut - she provided the editorial input, the time editing and managing, and the enthusiasm that I needed to finally admit that I could not do this alone, and dealing with the implications was not a precondition to publishing it. Solo work at the heart of a community project is not sensible, and I want to thank Cat for caring enough to get this moving and done. Shaun Chamberlin agreed to write the foreword, by which point I knew that somebody else was going to have to try and make sense of things and guide the reader gently to a perspective they could read from. What a task! I'm glad Shaun took it on. Maria Elvorith contributed our cover - an absolutely luminous being, I was glad to know her, however briefly.

This book is an interactive process. I'm hoping for reading groups, for annotated versions of the articles, for interviews and interaction with our authors, and for a second book, nominally titled The Present We Have. The hub for these activities is

Our hash tag for twitter (and other media) is #TheFWD / @TheFWD.

Part of the fluidity of this project is the power of the new infrastructure. Ward Cunningham's seed of genius, the Wiki, and the fine chaps at Appropedia who in addition to hosting and managing the world's largest online appropriate technology library, also have a very liberal, inclusionist attitude to side projects like this book. The New Public Thinking book which my collaborator Dougald Hine just released is also on this platform.

Finally, there's our printing process. PediaPress is a phenomenal service which exists to turn wikis into books. I'm not sure that they ever realized just how potent the MediaWiki/PediaPress combination is for producing new work, but the streamlining of workflow and the simple "just leave this to our software" mechanism by which the books are produced is truly revolutionary and liberating. It's not just print-on-demand, but the total fluidization of the concept and execution of the book as a mass-collaborative object.

And beyond finally, to our authors: this is, literally, your book. When I started this, I had an elitist notion of the future as, in some way, the domain of specialists who thought about the future a lot. What you've taught me is that the future is where every one of us will live our lives, and people know their own business best - you wrote about what you knew, and you wrote about what you cared about, and in the process, you created a work that has broadened my horizons, and deepened my appreciation for just how brilliant and talented people are.

You taught me that we know nothing about where we're going, and that the future is a dialogue between nine billion people, striving to find a common voice.

With heartfelt thanks to for their kind support, without which this book would certainly never have been produced. Thank you.

About the cover[edit | edit source] 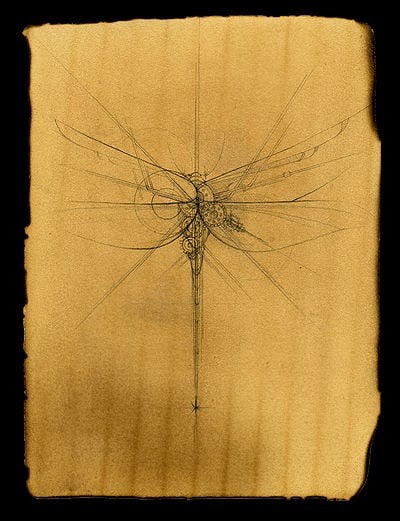 Dragonfly, by Maria Elvorith.
Page data
Retrieved from "https://www.appropedia.org/w/index.php?title=TheFWD_Introduction&oldid=607012"
Cookies help us deliver our services. By using our services, you agree to our use of cookies.
Categories:
Maintenance categories:
About Appropedia · Policies · Contact · Content is available under CC-BY-SA-4.0 unless otherwise noted.