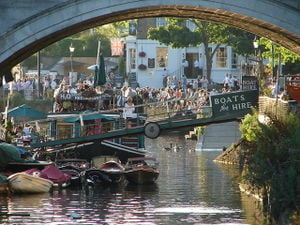 Location data
From Wikipedia:London Borough of Richmond upon Thames

The London Borough of Richmond upon Thames (pronunciation ) in southwest London forms part of Outer London and is the only London borough on both sides of the River Thames. It was created in 1965 when three smaller council areas amalgamated under the London Government Act 1963. It is governed by Richmond upon Thames London Borough Council and is divided into nineteen wards. The population is 198,019 and the major settlements are Barnes, East Sheen, Mortlake, Richmond, Twickenham, Teddington and Hampton.

The borough is home to Richmond Park, the largest park in London, along with the National Physical Laboratory and The National Archives. The attractions of Kew Gardens, Hampton Court Palace, Twickenham Stadium and the WWT London Wetlands Centre are within its boundaries and draw domestic and international tourism.

WWT London Wetland Centre is a wetland reserve managed by the Wildfowl and Wetlands Trust in the Barnes area of the London Borough of Richmond upon Thames, southwest London, England, by Barn Elms. The site is formed of four disused Victorian reservoirs tucked into a loop in the Thames.

The centre first opened in 2000, and in 2002 an area of 29.9 hectares was designated a Site of Special Scientific Interest as the Barn Elms Wetland Centre.

The centre occupies more than 100 acres (40 hectares) of land which was formerly occupied by several small reservoirs. These were converted into a wide range of wetland features and habitats before the centre opened in May 2000. It was the first urban project of its kind in the United Kingdom.

Parks take up a great deal of the borough and include Richmond Park, Bushy Park, Kew Gardens, and Hampton Court Park. There are over 100 parks and open spaces in Richmond upon Thames and 21 miles (34 km) of river frontage. 140 hectares within the borough are designated as part of the Metropolitan Green Belt. W

Richmond Cycling Campaign, Promoting and Encouraging cycling in the London Borough of Richmond upon Thames