This is a previous way that MOST'S RecycleBot worked, but failed in a strong way. The latest mechanism for it can be found here[edit | edit source]

Turning on the MOST RecycleBot[edit | edit source]

1. Turn on the Linux computer beside the RecycleBot and log into guest.

2. Connect the RecycleBot to the computer using the USB connection. This must be done first, before the heater or motor are plugged in, as the heater will default to ON without the Arduino to tell it not to.

3. Type in "arduino" in the terminal shell, to open the Arduino IDE, where the software for the arduino is written. (The shell is the black box at the top of the screen on the menu bar. It resembles the command propmt symbol in windowsOS) Find the location of the arduino software in /home/guest/recyclebot/arduino/recyclebotV2 and open the file, using the newly opened Arduino IDE.

4. Upload the program to the Arduino Uno, to make sure that the correct software is on the board.

6. There are 3 wires for the RecycleBot that need to be plugged in, a ground, the heater cord, and the motor cord. The ground should be plugged in only. Proceed to the next step.

7. Generally the motor will not need to be plugged in until the heater has melted some of the plastic first. It will be up to the user to determine that, depending on their situation. After all of the wires are plugged in, the RecycleBot is powered and controlled, and shoul run effectively.

The wiring is very simplistic, using an Arduino Uno as a board, and then 2 resistors, 2 thermistors, and a few wires to connect all the parts together. This simple approach should make troubleshooting quite easy, as there are only so many wires which one could possibly be looking at.

Each thermistor is connected, in series, to it's own set or a resistor, an analog input, a ground, and a 5V pin. The way it works, is that the 5V goes into the circuit, and through the thermistor, which changes resistance based on temperature. By using the Arduino Software to analyze the ratio of the fixed resistor and the thermistor, a temperature can be determined.

Previously, the RecycleBot Heater was controlled by a relay connected to the Arduino, which determined whether power could flow to the heater element or not. Currently, (10/21/14) the RecycleBot is undergoing an upgrade to the nichrome wire method, which should have little effect on the wiring of the actual Arduino board itself, hopefully. 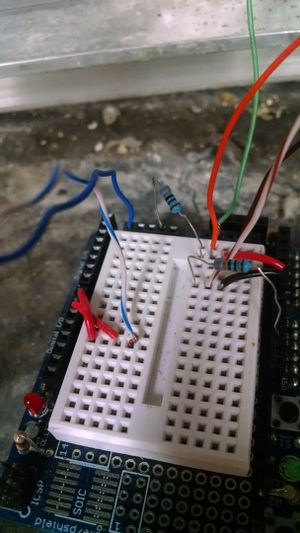 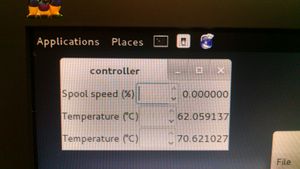 Here is what the controller should look like on startup. The temperatures might not be the same, but at the least should be real temperatures.

The controller software runs on the Linux computer right beside the RecycleBot. This allows user input, and also outputs what the current temperature of the extruder is. The spooler speed entry box currently does nothing (10/8/14) and the two temperatures indicate right by the die nozzle, and deeper inside the extruder.

To run the controller a new terminal shell must be opened. There is an icon on the top of the screen which resembles a black box, and looks similar to the WindowsOS command prompt. Open the terminal, and then type the following:

Each should have a space before the command begins.

The software that runs on the RecycleBot's Arduino was written by Bas Wijnen, and can be found almost here. Written in C++ using the Arduino IDE, it examines and controls the temperature in the extruder, based upon user input and feedback.

The software may need to be re-uploaded to the Arduino occassionaly, and if it is uploaded everytime, it will do little harm.

The software previously had a variable inside of it called "Alpha" which represented all of the constants in the equations to calculate what the temperature was based on the thermistor. After some issues began to crop up, the "Alpha" variable was removed and replaced with all of it's components, illustrated here.

After experiencing failure of control systems, and inaccuracies with a previous design, the MOST RecycleBot was upgraded to using Nichrome wire as the new heating element, and a commercially available temperature controller. This is in the sake of keeping the machine running at an accurate level, until an open-source solution can be developed.

Turning On and Setup[edit | edit source]

The black cable, when plugged in, will provide power to the temperature controller circuit. The white cable provides power to the extruder motor, which will activate as soon as it is plugged in. Once the temperature controller is powered, the lights on it will turn on, as shown in the picture on the right. The "<</AT" button, when held down for a moment, will bring up the green lights to be selected. Presing the button further times changes the decimel place that is being changed. When you have selected the desired deciemel place, the green UP and DOWN arrows will change the value of the digit. Once the desired temperature has been input, pressing, "SET" will confirm the temperature and being heating.

The temperature controller is connected to the power cable from the wall, the thermocouple, a steady-state relay, and one end of the nichrome wire heating element.