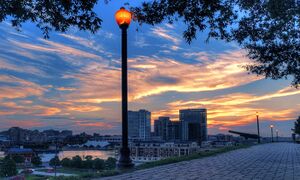 Maryland (US: (listen) MERR-il-ənd) is a state in the Mid-Atlantic region of the United States.

Maryland joined with neighboring states during the end of the 20th century to improve the health of the Chesapeake Bay. The bay's aquatic life and seafood industry have been threatened by development and by fertilizer and livestock waste entering the bay.

In 2007, Forbes.com rated Maryland as the fifth "Greenest" state in the country, behind three of the Pacific States and Vermont. Maryland ranks 40th in total energy consumption nationwide, and it managed less toxic waste per capita than all but six states in 2005.

In March 2017, Maryland became the first state with proven gas reserves to ban fracking by passing a law against it.

From Wikipedia:Solar power in Maryland

Solar power in Maryland is supported by the state's legislation regarding the Renewable Portfolio Standard and Solar Renewable Energy Credit (SREC) program. The target for renewable energy as of 2017 is 20% by 2020, including 2% from solar power.

According to the Maryland Energy Administration, Maryland is exposed to approximately 5.3kWh per square meter of solar energy on a daily basis, and as of 2016, the state had 508 MW installed which ranks Maryland 11th in the nation for installed solar capacity.

Baltimore 311 enables real-time collaboration with citizens, “deputizing” mobile users to become the city’s eyes and ears. Citizens report potholes, graffiti, and other issues from anywhere in the city using their mobile phone