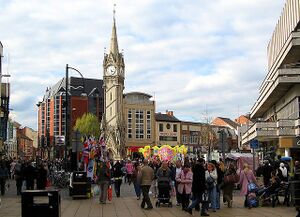 Leicestershire takes its name from the city of Leicester located at its centre and administered separately from the rest of the county. The ceremonial county – the non-metropolitan county plus the city of Leicester – has a total population of just over 1 million (2016 estimate), more than half of which lives in the Leicester Urban Area.

The Leicester Bike Park is a bicycle parking facility in Leicester Town Hall, England. It is managed by the City Council.

The Bike Park was developed as the result of research into public attitudes to cycling, carried out by Groundwork Leicester and Leicestershire (then trading as Environ) in the 1990s. These studies showed that, in addition to the need for safe cycle routes, the lack of secure bike parking and changing facilities for commuters were barriers preventing people from cycling. The Bike Park was opened in 1997.

Through the Bike Park and other initiatives, Leicester City has seen an 81% growth in commuter cycling (2004 to 2009) and the average daily number cycle journeys in the city has grown to 10,500.

Freeuse Leicestershire If you don't use it, Freeuse it!

LeicesterSHARE.com, part of the lifstshare network - Transport and Streets, information from Leicester City Council, includes information on cycling, buses and walking in Leicester

Lessons from Leicester - how one city is making space for cycling, Nov [2]