Humankind is better at creating problems than solving them.

We created plenty of pointless, bloody wars. We now know that, inadvertently, we created the conditions that spread plagues amongst our own and other tribes and nations. In the previous century, we did solve a few problems. A stalemate that kept a nuclear war at bay was devised. Some very old plagues were eradicated, an achievement never dreamed of before, let alone accomplished.

But in the main, mankind is very poor at problem solving on a societal or cultural scale. We either endure or we throw enough resources to either overwhelm the 'enemy' or exhaust ourselves. In the main, our experience has been of tackling one problem at a time. The literature from Tainter, Diamond and others suggests that a civilisation often fails to cope when beset by more than one factor type problem.

We now have a vast array of tools for generating complex analysis about our dilemmas. We also have a very poor apparatus for deciding what to do about our problems. So we know more about what we are facing into but we are hamstrung from doing anything about it.

Some of the problem stems from the fact that we have a largely reductive science and our toolset currently reflects this state of affairs. We have only recently begun to tangle with the issues raised by dynamically interacting problem-spaces, such as DNA-protein interactions, weather systems and networked autonomous computers.

Frankly, we are not good at seeing the wood for the trees. I would like to throw a 'framework' onto the bonfire of our vanities to see if it helps at all.

Peak resources of all kinds (but principally, crude oil) fall into the category of negative or declining Availability but positive Actuality. Peak Population is positive for both Availability and Actuality.

Peak Debt is negative for both Availability and Actuality. A better way of thinking of Peak Debt might be in terms of an optimal ratio for debt/equity rations for a given technological/EROI situation; clearly, we are in negative territory with regard to global debt/equity ratios.

Peak information is clearly positive and increasing. Information and its hoped-for corollary, knowledge, are intangible and therefore on the 'Artificial' side of the graph but on the positive side of the Availability axis. 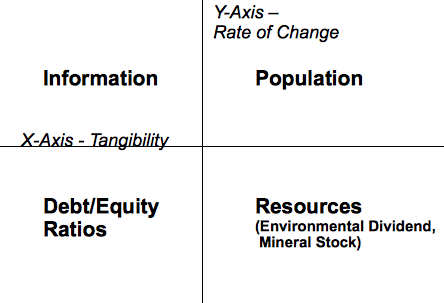 From my point of view, masses of population and information are good things, but it must not be forgotten that they both imply constraints. Information is not knowledge and it is most certainly not wisdom. It has to be managed and used creatively. Equally, a population has to be fed, watered and housed before it can start to produce anything, whether that be food, art or knowledge.

There are very real negatives in this picture that we are very well aware of.

You might well be asking where climate change is in all of this 'graphology'. It is in amongst Peak Resources because I view the renewable output of the planet (food, air, water) as a 'dividend' of the physical wealth of the planet and, in the same way as we have damaged the debt/equity ratios of our imaginary/intangible assets, we have done the same to the 'real assets' and will face declining 'real dividends' until we repair the damage done.

Although I have classed Information and Population as 'Positives,' they are not costless and they can be problems unless they are handled correctly.

Which leads me to my final and unhappy conclusion.

I started this article by saying that 'Humankind' had not shown much aptitude to date for handling problems, even if they came one at a time. Each of these four issues constitutes a serious problem for humanity. Worse, each of these represents a constraint on the other.

A blade can be a tool or a weapon. Two blades in opposition to each other is commonly called a scissors and is much more likely to be used as a tool than a weapon arising from its configuration. Humanity faces a 'four bladed' scissors, each blade of which cuts on the other.

Our information and our population mean that we are poised on the cusp of enormous potential, but our history tells us that we are likely to end up with bloody fingers before we get the hang of the 'tool'.

Page data
Retrieved from "https://www.appropedia.org/w/index.php?title=A_Four-Bladed_Scissors_-_Arthur_Doohan&oldid=618121"
Cookies help us deliver our services. By using our services, you agree to our use of cookies.
Categories:
About Appropedia · Policies · Contact · Content is available under CC-BY-SA-4.0 unless otherwise noted.