From Appropedia
Redirected from Utah 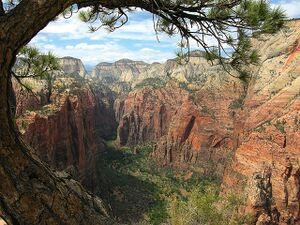 Utah ( YOO-tah, (listen) YOO-taw) is a state in the Mountain West subregion of the Western United States. Utah is a landlocked U.S. state bordered to its east by Colorado, to its northeast by Wyoming, to its north by Idaho, to its south by Arizona, and to its west by Nevada. Utah also touches a corner of New Mexico in the southeast. Of the fifty U.S. states, Utah is the 13th-largest by area; with a population over three million, it is the 30th-most-populous and 11th-least-densely populated. Urban development is mostly concentrated in two areas: the Wasatch Front in the north-central part of the state, which is home to roughly two-thirds of the population and includes the capital city, Salt Lake City; and Washington County in the southwest, with more than 180,000 residents. Most of the western half of Utah lies in the Great Basin.

Wikipedia: Solar power in Utah has the capacity to provide almost a third of all electricity used in the United States.

Salt Lake City, Cycling: Salt Lake City is widely considered a bicycle-friendly city. In 2010, Salt Lake City was designated as a Silver-level Bicycle Friendly Community by the League of American Bicyclists, placing the city in the top 18 bicycling cities in the U.S. with a population of at least 100,000. Many streets in the city have bike lanes, and the city has published a bicycle map. However, off-road biking in the valley has suffered significantly as access to trails and paths has declined with the increase of housing developments and land privatization.

One popular cycling and walking route is the loop around City Creek Canyon on Bonneville Boulevard. The city has designated the road as one lane only (one-way) for motor vehicles, turning the other lane over to two-way cyclists and pedestrians. City Creek Canyon Road itself is closed to motor vehicles on odd-numbered days during the summer, while bicycles are prohibited on even-numbered days and holidays during the summer.

Salt Lake City developed the first bicycle priority lanes in the U.S., called "Green Shared Lanes". Transportation Engineer Dan Bergenthal pioneered this design in 2008, placing a 4' wide green band down the middle of a travel lane. Similar designs have since been implemented in Long Beach, California, and Brookline, Massachusetts. These designs are also sometimes known as "super sharrows".

On 25 September 2010, UTA in partnership with Salt Lake City, the Utah Department of Transportation, the Wasatch Front Regional Council, and the Mayor's Bicycle Advisory Committee, opened a Bicycle Transit Center (BTC) at the Intermodal Hub. The BTC is anticipated to serve multi-modal commuters from TRAX and FrontRunner, as well as providing a secure bicycle parking space for bicycle tourists who want to tour the city on foot or transit.

In April 2013, Salt Lake City launched a bike share program known as GREENbike. The program allows users to pay $5 per day to access bicycles, with the option of purchasing a weekly or annual pass. As of the launch of the program, there were 10 stations located in the downtown core. In addition to the bike sharing program, eighty businesses in the city participate in the Bicycle Benefits program, which provides discounts to customers who arrive by bicycle.

As a result of this increasing support, Salt Lake City's on-road bikeway network has grown to encompass 200 lane mi.