From Appropedia
Redirected from Tower Hamlets 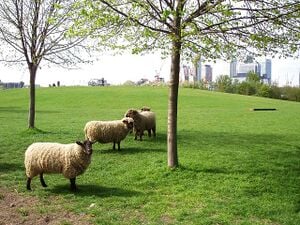 The London Borough of Tower Hamlets is a London borough covering much of the traditional East End. It was formed in 1965 from the merger of the former metropolitan boroughs of Stepney, Poplar, and Bethnal Green. 'Tower Hamlets' was originally an alternative name for the historic Tower Division; the area of south-east Middlesex, focused on (but not limited to) the area of the modern borough, which owed military service to the Tower of London.

The borough lies on the north bank of the River Thames immediately east of the City of London, and includes much of the redeveloped Docklands area. Some of the tallest buildings in London occupy the centre of the Isle of Dogs in the south of the borough. A part of the Queen Elizabeth Olympic Park is in Tower Hamlets.

A 2017 study by Trust for London and New Policy Institute, found that Tower Hamlets has the highest rate of poverty, child poverty, unemployment, and pay inequality of any London borough. However, it has the lowest gap for educational outcomes at secondary level.

There are over one hundred parks and open spaces in Tower Hamlets ranging from the large Victoria Park, to numerous small gardens and squares. The second largest, Mile End Park, separated from Victoria Park by a canal, includes The Green Bridge that carries the park across the busy Mile End Road. One of the smallest at 1.19 ha is the decorative Grove Hall Park off Fairfield Road, Bow, which was once the site of a lunatic asylum. Other parks include Altab Ali Park, Mudchute Park and Grove Hall Park.

The Good Gym, run for good

From Wikipedia:Mudchute Park and Farm

Mudchute Park and Farm is a large urban park and farm in Cubitt Town on the Isle of Dogs in the London Borough of Tower Hamlets, just south of Canary Wharf. It is a Local Nature Reserve and a Site of Metropolitan Importance for Nature Conservation.

Stepney City Farm is a city farm in Stepney, London, England. It is situated on Stepney Way with its entrance on the roundabout leading onto Stepney High Street and Belgrave Street towards Limehouse. The land is owned by Tower Hamlets Council through a trust, "The King George's Fields Trust" chaired by the Mayor of Tower Hamlets.

The farm runs workshops in rural crafts through its resident artisans; blacksmith, woodworker and potter. In 2011, the farm created an 800 square metre community garden and added low-cost growing boxes for community use.

In May 2013 a cafe and shop selling farm-reared meat and eggs as well as vegetables grown on-site was opened. It is open to the public six days a week. There is a Farmers' Market every Saturday. It is the home of The Green Wood Guild, a green wood and traditional woodworking craft workshop run by Barn the Spoon.

The End Child Poverty coalition published that Tower Hamlets has the highest proportion of children in poverty of any local authority in the UK at 49% (and as high as 54.5% in the Bethnal Green South ward). W

Tower Hamlets Borough Council operates a walking bus service for school pupils on agreed routes with some running every school day while and others once or twice a week depending on the number of adult volunteers involved. W

The Regent's Canal enters the borough from Hackney to meet the River Thames at Limehouse Basin. A stretch of the Hertford Union Canal leads from the Regent's canal, at a basin in the north of Mile End to join the River Lea at Old Ford. A further canal, Limehouse Cut, London's oldest, leads from locks at Bromley-by-Bow to Limehouse Basin. Most of the canal tow-paths are open to both pedestrians and cyclists.[1]

St Margaret's House is a community centre in Bethnal Green in the London Borough of Tower Hamlets. It was established in October 1889 as the Bethnal Green Ladies' Committee, with Princess Mary Adelaide, Duchess of Teck, as president. It has since become a charity supporting creativity and wellbeing in Tower Hamlets, running a variety of community projects providing spaces for residents to eat, shop, learn, create and enjoy cultural programmes.

Page data
Retrieved from "https://www.appropedia.org/w/index.php?title=Tower_Hamlets_community_action&oldid=665940"
Cookies help us deliver our services. By using our services, you agree to our use of cookies.
Categories:
About Appropedia · Policies · Contact · Content is available under CC-BY-SA-4.0 unless otherwise noted.