From Appropedia
Redirected from Nottingham 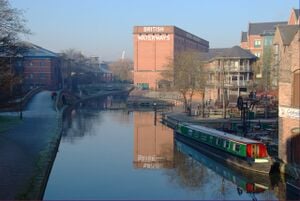 Nottingham ( (listen) NOT-ing-əm, locally ) is a city and unitary authority area in Nottinghamshire, East Midlands, England. It is located 110 miles (180 km) north-west of London, 30 miles (48 km) south-east of Sheffield and 45 miles (72 km) north-east of Birmingham. Nottingham has links to the legend of Robin Hood and to the lace-making, bicycle and tobacco industries. The city is also the county town of Nottinghamshire and the settlement was granted its city charter in 1897, as part of Queen Victoria's Diamond Jubilee celebrations. Nottingham is a tourist destination; in 2018, the city received the second-highest number of overnight visitors in the Midlands and the highest number in the East Midlands.

In 2020, Nottingham had an estimated population of 330,000. The wider conurbation, which includes many of the city's suburbs, has a population of 768,638. It is the largest urban area in the East Midlands and the second-largest in the Midlands. Its Functional Urban Area, the largest in the East Midlands, has a population of 919,484. The population of the Nottingham/Derby metropolitan area is estimated to be 1,610,000. The metropolitan economy of Nottingham is the seventh-largest in the United Kingdom with a GDP of $50.9 billion (2014). Aside from Birmingham, it is the only city in the Midlands to be ranked as a sufficiency-level world city by the Globalization and World Cities Research Network.

Nottingham is a major sporting centre and, in October 2015, was named 'Home of English Sport'. The National Ice Centre, Holme Pierrepont National Watersports Centre and Trent Bridge international cricket ground are all based in or around the city, which is also the home of two professional football teams: Notts County, formerly the world's oldest professional league club, and Nottingham Forest, famously two-time winners of the UEFA European Cup under Brian Clough and Peter Taylor in 1979 and 1980. The city has professional rugby, ice hockey and cricket teams; it also hosts the Aegon Nottingham Open, an international tennis tournament on the ATP and WTA tours. This accolade came just over a year after Nottingham was named as the UK's first City of Football.

The city is served by Nottingham railway station and the Nottingham Express Transit tram system; its bus company, Nottingham City Transport, is the largest publicly owned bus network in England. In December 2015, Nottingham was named a 'City of Literature' by UNESCO, joining a list of 20 Cities of Literature. The title reflects Nottingham's literary heritage, with Lord Byron, D. H. Lawrence and Alan Sillitoe having links to the city, as well as a contemporary literary community, a publishing industry and a poetry scene. The city is served by three universities: the University of Nottingham, Nottingham Trent University and the Nottingham campus of the University of Law; it hosts the highest concentration of higher education providers in the East Midlands.

The Forest Recreation Ground is an open space and recreation ground in Nottingham, England, approximately one mile north of the city centre. This urban space is bounded by the neighbourhoods of Forest Fields to the north, Mapperley Park to the east, Arboretum to the south and Hyson Green to the west. It is best known as the site of the city's famous annual Goose Fair.

Nottingham is bounded by a green belt area, provisionally drawn up from the 1950s. Completely encircling the city, it extends for several miles into the surrounding districts, as well as towards Derby.

From Wikipedia:Transport in Nottingham § Cycling

Nottingham benefits from a network of traffic free cycle routes, these include:
The Derby-Sheffield section of Route 6 of the National Cycle Network passes by University of Nottingham, Queen's Medical Centre continuing on through Wollaton and Bulwell. Route 15 of the National Cycle Network from Nottingham to Sleaford starts from Trent Bridge and passes by Holme Pierrepont National Watersports Centre, continuing on through Radcliffe on Trent and Bingham.

The Big Track is a circular cycle route which follows the tow paths of the River Trent, Beeston Canal and Nottingham Canal. National Cycle Routes passing through Nottingham are maintained by volunteers from Sustrans. Cyclists in the Nottingham area are represented by Pedals (The Nottingham Cycling Campaign).

Pedals is a voluntary organisation founded in 1979 to encourage more people to use bicycles and to campaign for safer and more attractive conditions for cyclists in the Nottingham area. Pedals campaigned to get Nottingham one of the country's largest network of urban cycle routes in the 1980s. It continues to press for many more facilities, especially in and across the City Centre and the north side of Nottingham, as well as linking better to nearby countryside. Monthly meetings are held at 7.30pm on the third Monday of every month (except public holidays) at the Vat and Fiddle Public House near Nottingham railway station.

Veggies of Nottingham, also known as Veggies Catering Campaign, is a company and a campaigning group based in Nottingham, England, promoting ethical alternatives to mainstream fast food. It does this by hosting events such as the annual East Midlands Vegan Festival, publishing books and leaflets, and maintaining an extensive website, including a Contacts Directory of groups with similar aims. As a non-profit worker co-operative it also provides affordable, wholesome, minimally-packaged vegan catering at a wide range of events and protests using fair trade, organic and/or locally sourced ingredients.

Nottingham is the seventh largest conurbation in the United Kingdom. Despite this, the city had a poor transport system in the 1980s. The government has in the early twenty-first century invested heavily in the transport network of Nottingham, which has led to the re-opening of the Robin Hood Line and the construction of a light rail network, Nottingham Express Transit.

Nottingham Express Transit (NET) is a light-rail system. The first line opened on 9 March 2004, having cost £200 million to construct. The scheme took 16 years from conception to implementation. There are currently two lines, with a total of four destinations: Hucknall and Phoenix Park in the north, and Clifton and Beeston in the south. The Hucknall line runs parallel to the Robin Hood Line. Tickets can be bought at tram stops.

Nottingham's waterways, now primarily used for leisure, were used extensively for transportation in the past.

The Sumac Centre is a self-managed social centre in Nottingham, UK. It provides resources, meeting spaces and workshops for groups and individuals, and supports campaigning for human rights, animal rights, the environment, and peace. It is part of the UK Social Centre Network and the radical catering group Veggies is based at the centre. It receives no regular funding, the core groups each pay rent that goes toward the mortgage and running costs. Some of the groups are run by volunteers. Its origins can to traced to the Rainbow Centre, which was established in 1984.

Now Britain needs clothes banks too. What sort of society are we living in? Frances Ryan, Feb 11[8]