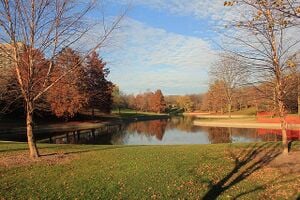 Missouri is a state in the Midwestern region of the United States. Ranking 21st in land area, it is bordered by eight states (tied for the most with Tennessee): Iowa to the north, Illinois, Kentucky and Tennessee to the east, Arkansas to the south and Oklahoma, Kansas and Nebraska to the west. In the south are the Ozarks, a forested highland, providing timber, minerals, and recreation. The Missouri River, after which the state is named, flows through the center into the Mississippi River, which makes up the eastern border. With more than six million residents, it is the 19th-most populous state of the country. The largest urban areas are St. Louis, Kansas City, Springfield and Columbia; the capital is Jefferson City.

The Missouri Botanical Garden is a botanical garden located at 4344 Shaw Boulevard in St. Louis, Missouri. It is also known informally as Shaw's Garden for founder and philanthropist Henry Shaw.

From Wikipedia:Missouri Department of Conservation

The Missouri Department of Conservation (MDC) and the Missouri Conservation Commission were created by Article IV Sections 40-42 of the Missouri Constitution, which were adopted by the voters of the state in 1936 as Amendment 4 to the constitution. The Commission is vested with control, management, restoration, conservation, and regulation of fish, forest, and wildlife resources of the state.The Department of Conservation owns and oversees hatcheries, sanctuaries, refuges, and reservations, and enforces the state wildlife code. The Commission consists of four individuals appointed by the Governor of Missouri to serve unpaid 6-year terms. No more than two of the individuals may be from the same political party.

Recreational and commercial uses of public forests, including grazing, logging, and mining, increased after World War II. Fishermen, hikers, campers, and others started lobbying to protect forest areas with a "wilderness character." During the 1930s and 1940s Aldo Leopold, Arthur Carhart and Bob Marshall developed a "wilderness" policy for the Forest Service. Their efforts bore fruit with the Wilderness Act of 1964, which designated wilderness areas "where the earth and its community of life are untrammeled by men, where man himself is a visitor and does not remain." This included second growth public forests like the Mark Twain National Forest.

From Wikipedia:Solar power in Missouri

Solar power in Missouri has been a growing industry since the early 2010s. Solar power is capable of generating 42.7% of the electricity used in Missouri from rooftop solar panels totaling 28,300 MW.

Net metering is available only during a billing period. Excess generation is credited at avoided cost rate, and lost if any remains after a year, giving the state a B rating.

IKEA installed a 1.28-MW solar array on its St. Louis store which was the largest rooftop installation in the state. It was completed in July 2015.

Missouri's largest solar farm is located in Christian County, just outside of Nixa on a plot owned by Gardener Capital. The farm generates 9% of the power needs of Nixa, Missouri transmission grid.

The EarthWays Center is a group at the Missouri Botanical Garden that provides resources on and educates the public about green practices, renewable energy, energy efficiency, and other sustainability matters. W

"Being part of the Mutual Aid Network allows us to connect to and co-create a global movement of people who are working to build just and sustainable economies," says Julia Ho, founder of Solidarity Economy St. Louis. "The only way for us to truly achieve mutual aid in our own communities is by extending mutual aid to others." [1]