From Appropedia
Redirected from Minnesota 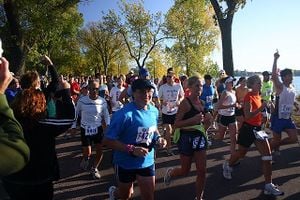 Minnesota ( (listen)) is a state in the upper midwestern region of the United States. It is the 12th largest U.S. state in area and the 22nd most populous, with over 5.75 million residents. Minnesota is home to western prairies, now given over to intensive agriculture; deciduous forests in the southeast, now partially cleared, farmed, and settled; and the less populated North Woods, used for mining, forestry, and recreation. Roughly a third of the state is covered in forests, and it is known as the "Land of 10,000 Lakes" for having over 14,000 bodies of fresh water of at least ten acres. More than 60% of Minnesotans live in the Minneapolis–Saint Paul metropolitan area, known as the "Twin Cities", the state's main political, economic, and cultural hub. With a population of about 3.7 million, the Twin Cities is the 16th largest metropolitan area in the U.S. Other minor metropolitan and micropolitan statistical areas in the state include Duluth, Mankato, Moorhead, Rochester, and St. Cloud.

Since the late 20th century, Minnesota's economy has diversified significantly, shifting from traditional industries, such as agriculture and resource extraction, to services, finance, and health care. The state is home to 11 federally recognized Native American reservations (seven Ojibwe, four Dakota), and remains a center of Scandinavian and German cultures. In recent decades, it has become increasingly multi-cultural, amid greater domestic migration and immigration from Latin America, Asia, the Horn of Africa, and the Middle East. It has the nation's largest population of Somali Americans and second-largest Hmong population. Minnesota's standard of living index is among the highest in the nation, and the state is among the best-educated in the nation. It is ranked among the best states in metrics such as employment, median income, safety, and governance.

From Wikipedia:Minneapolis § Parks and recreation

In his book The American City: What Works, What Doesn't, Alexander Garvin wrote Minneapolis built "the best-located, best-financed, best-designed, and best-maintained public open space in America".

The city's Chain of Lakes, consisting of seven lakes and Minnehaha Creek, is connected by bike, running, and walking paths and used for swimming, fishing, picnics, boating, and ice skating. A parkway for cars, a bikeway for riders, and a walkway for pedestrians runs parallel along the 52-mile (84 km) route of the Grand Rounds National Scenic Byway. Approximately 15% of city land is parks, in accordance with the 2020 national median, and 98 percent of residents live within a half mile of a park.

The United States Environmental Protection Agency, Minnesota Department of Natural Resources, and World Wildlife Fund maintain separate classifications of the state's ecoregions. Although different, they generally agree on delineating between the coniferous forest in the north-central portion and the Arrowhead, a temperate deciduous forest in the central and southeast, and the tallgrass prairie in the southern and western portions of the state. The northern coniferous forests are a vast wilderness of pine and spruce trees mixed with patchy stands of birch and poplar. W

From Wikipedia:Solar power in Minnesota

Solar power in Minnesota expanded significantly in the early 2010s as a result of the cost decrease of photovoltaics and favorable policies. By 2016, it began to grow quickly.

From Wikipedia:Wind power in Minnesota

At the end of 2016, the installed capacity for wind power in Minnesota was 3,500 megawatts (MW). Wind power generated nearly 18 percent of Minnesota’s electricity in 2016, ranking sixth in the nationfor wind energy as a share of total electricity generation.

Bicycling has been a popular activity in Minnesota since the late 19th century. Since at least 2001, the state has claimed to have more miles of bike trails than any other in the U.S. For 2017, Minnesota was ranked as the 2nd most bicycle-friendly state by the League of American Bicyclists, moving up from its 5th-ranked position in 2008 and 2009. It was only exceeded by Washington. Much of the state's bicycle culture is centered in Minneapolis, the state's largest city, but the extensive network of trails has helped make cycling common throughout the state.

Bicycling magazine called Minneapolis the country's #1 bike city in 2010.Among the 50 U.S. cities with the largest workforces, Minneapolis has ranked #2 (behind Portland, Oregon) in percentage of bicycle commuters since 2007, according to the U.S. Census Bureau. Among the largest 442 cities in the country, it ranked a more modest #15 that year. However, commuting data only provides a small window into overall activity—nationally, only about 5% of cycling trips are for commuting to school or work.

Nice Ride Minnesota is a seasonally operated nonprofit bicycle sharing system in Minneapolis and St. Paul, Minnesota based on the BIXI brand created by Public Bike System Company and first used in Montreal. Launched on June 10, 2010, it served over 10,000 trips in its first month and reached 100,817 rides in the first season of operation. The bicycles in the system are manufactured by Cycles Devinci. They are painted fluorescent green and include a cargo carrier and headlights. They receive daily maintenance, and are redistributed throughout the system via truck.

The system presently offers 1,700 bicycles for rent at 190 kiosks in both Minneapolis and St. Paul. The solar-powered kiosks are distributed throughout much of Minneapolis and Saint Paul. Bike availability can be checked in real-time via smartphone or an online map. In the long term, the network is intended to cover most of Minneapolis and St. Paul. Nice Ride operates from the first week of April through the first week of November. The bikes and stations are removed during the winter in order to protect them from damage (particularly corrosion from road salt) and make way for snow plows.

Great Lakes Commons, a grassroots effort to establish the Great Lakes as a thriving, living commons — shared and sacred waters that we all protect in perpetuity.

Energy Data & Statistics for Minnesota, from the U.S. Department of Energy

The Surprising State Where Solar Energy Is Flourishing, Jul 19[1]

Craftsman donates his tools - and himself, Apr 23

Fighting for Social, Economic, and Environmental Justice in Minnesota, July 24[3]

Lessons from a Surprise Bike Town, How snowy Minneapolis beat out Portland for the title of best bike city in America,[5] September 28

Page data
Retrieved from "https://www.appropedia.org/w/index.php?title=Minnesota_community_action&oldid=667955"
Cookies help us deliver our services. By using our services, you agree to our use of cookies.
Categories:
About Appropedia · Policies · Contact · Content is available under CC-BY-SA-4.0 unless otherwise noted.