From Appropedia
Redirected from Korea 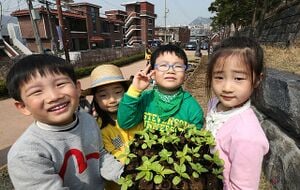 The Metropolitan Government plans to provide its photos of Seoul to the citizens under the Creative Commons License (CCL – permitting creations to be used by others freely under certain conditions). The Seoul Metropolitan Government intends to make a "Seoul On-line Photo Bank" so that citizens may share Seoul-related photos or contents with each other online.

The Seoul Metropolitan Government plans to support the sharing of used children's clothes since they soon become too small for rapidly growing children. This way, used clothes dumped as waste will decrease significantly. On the other hand, the Seoul Metropolitan Government has already implemented policies of saving resources by having printers or other office equipment shared more intensively by reducing them in its offices.

Corporate commuter buses running from the city's suburbs or other satellite cities to the city center have roughly 15% or 2,300 empty seats. The Metropolitan Government plans to introduce a system wherein such empty seats could be shared with pregnant women or others who need care in transportation services.

During the preparations for the World Cup, Seoul's Nanjido Landfill was transformed into Haneul Park (Korean: 하늘공원). The trash, which had been accumulating for decades, was covered in a meter of soil to form two large hills. Trees now cover the slopes, and footpaths criss-cross through large stands of silver grass (Miscanthus sinensis). As the grass forms large tufts of seedheads, it changes the appearance of park, making it a popular destination in the Autumn. Several animal species now inhabit the park, including birds and the regionally endangered boreal digging frog (Kaloula borealis). Several wind turbines power the park's lights. The methane that is produced by the landfill is used to power nearby neighborhoods.[6] 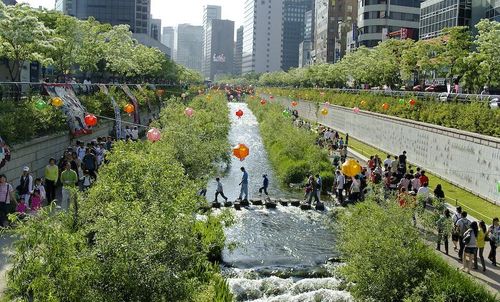 "The villagers feel that the school is their school because they are involved. Children know all teachers well. It's not just about learning information. They can see how a potter makes pottery, exhibits, sells and does bookkeeping. Imagine what a vivid example it is! The teacher isn't someone who just comes to class, teaches few things then runs away to his home and no one knows where the teacher lives."

The success of Sungmisan Village has inspired numerous urban villages in Seoul. The city government now actively supports the development of urban villages through the Seoul Community Support Center.[7]

Page data
Retrieved from "https://www.appropedia.org/w/index.php?title=South_Korea_community_action&oldid=656253"
Cookies help us deliver our services. By using our services, you agree to our use of cookies.
Categories:
About Appropedia · Policies · Contact · Content is available under CC-BY-SA-4.0 unless otherwise noted.