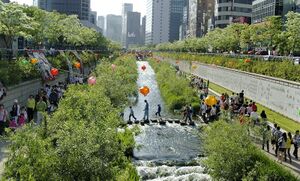 CASwiki news articles have a focus on news of community action for sustainability. This article is an offshoot from CASwiki's South Korea community action article and is for news and comment in that context.

In the world’s first ‘Coronavirus elections’, South Korea voted for climate action. In the first national elections in the time of Covid-19, South Korea’s Democratic Party won in a landslide – after putting forward a bold Green New Deal plan in their manifesto. Apr 23 [1]

In South Korea, An Innovative Push to Cut Back on Food Waste, May 20 [5]

Here's what happened when a neighborhood decided to ban cars for a month, May 11 [6]

On 20 September 2012, the Seoul Metropolitan Government disclosed its plan for promoting the “Sharing City, Seoul” project, which includes 20 sharing programs and policies for generating or diffusing “sharing city” infrastructure after declaring the “Seoul as a Sharing City” vision. The Metropolitan Government regards “sharing city” as a new alternative for social reform that can resolve many economic, social, and environmental issues of the city simultaneously by creating new business opportunities, recovering trust-based relationships, and minimizing wastage of resources. In particular, the city plans to deploy secondary sharing infrastructure from now on to enhance the usefulness of idle resources such as space, objects, and talents since its urban policies have concentrated on constructing primary sharing infrastructure to date, such as roads, parking lots, schools, and libraries. Parallel to the above, the Metropolitan Government plans to implement policies of opening public resources to the citizens by having the public sector take the initiative while focusing on the implementation of policies that respect and promote private sector capabilities. [7]