From Appropedia
Redirected from Islington 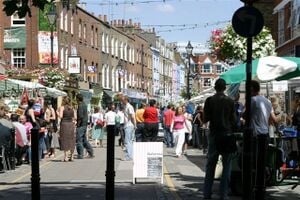 The London Borough of Islington is a London borough in Inner London. The borough includes a significant area to the south which forms part of central London. Islington has an estimated population of 215,667. It was formed in 1965 by merging the former metropolitan boroughs of Islington and Finsbury.

The merged entity remains the second smallest borough in London and the third-smallest district in England. The borough contains two Westminster parliamentary constituencies, both formerly represented by Labour Members of Parliament: Jeremy Corbyn, the party's leader from 2015 to 2020, represents Islington North and currently sits as an independent after the whip was withdrawn in October 2020, and Emily Thornberry represents Islington South & Finsbury. The local authority is Islington Council. The borough is home to football club Arsenal, one of the most successful clubs in England and its home Emirates Stadium is one of the largest football stadiums in the country.

Freightliners City Farm is an urban farm located in Lower Holloway in the London Borough of Islington. It is the only urban farm in the borough.

The City Farm movement provides opportunities for young people in an urban environment to see and interact with creatures they would not otherwise see. Freightliners is a community-organised charity, receiving funding both from the council and donations.

The Freightliners City Farm was founded on a site in York Way, NW1 between King's Cross and Camden Town. The site was a goods yard formerly owned by Freightliners, the freight distribution branch of British Rail. The fourteen acre site had been acquired by Camden Council for eventual use for council housing. Building was not due to begin for several years and so in 1972 various community groups were given premises on the site. The site continued to be known to local users as ‘Freightliners’. (The Maiden Lane Estate was eventually built on the site.)

Some workers were employed at the youth club, Freightliners Free School and pensioners club on the site. One of these workers, Sandy, had grown up on her family's farm in Wales and it was she who created the Freightliners Farm on the site. The Farm quickly proved popular with local children and expanded.

In 1978 the Freightliners site was ready to be developed for council housing and the Farm found a new permanent home at its present location in the neighbouring borough of Islington where purpose-built farm buildings were erected in 1988. The site is half a hectare.

There is an ornamental garden, vegetable, herb and fruit gardens on the site. There is also an animal village, where children can look at rabbits, and a farm shop and café.

Regent's Canal is a canal across an area just north of central London, England. It provides a link from the Paddington Arm of the Grand Union Canal, 550 yards (500 m) north-west of Paddington Basin in the west, to the Limehouse Basin and the River Thames in east London. The canal is 8.6 miles (13.8 km) long.

Why we locals are taking on the development of Mount Pleasant, September 21 [2]