Over half of the world's population already live in urban areas, making sustainable cities a key part of a sustainable planet Earth.

A sustainable city, ecocity or ecopolis is a entire city that is created with the intent to minimize use of energy, water and imported food, and minimize impact from its waste heat, air pollution and water pollution. Richard Register coined the term "ecocity" in his 1987 book, Ecocity Berkeley: building cities for a healthy future. Another leading figure to envisioned the sustainable city was architect Paul F. Downton, who later founded Ecopolis Architects.

What is a sustainable city[edit | edit source]

A sustainable city can feed and power itself with little reliance on the surrounding countryside, and creates the smallest possible ecological footprint for its residents. This is friendly to the surrounding environment, with negligible pollution, low-impact land use, and alleviation of climate change. One effort to try and conceptualise and measure this is the Extended urban metabolism model.

The first thing to consider in how sustainable a city can be is its physical layout. Sprawling means more transport cost, more cost and energy used for infrastructure, and more difficulty in ecological processing of water and wastewater.

These ecological cities are achieved though various means, such as:

Today, still few real life examples of sustainable cities exist. On a small scale, green buildings such as the Melbourne city council building in Australia produce much of their own energy supplies. Many shanty towns in the underdeveloped world already practice the principles of an ecopolis: efficient power use, recycling, private agriculture, and pedestrianisation. The planned development of Sociópolis in Valencia,W Spain will provide low-rise affordable housing integrated into traditional agricultural zones and irrigation systems. Perhaps the most ambitious project is a planned extension in the Chongming district of Shanghai, referred to as Dongtan. Dongtan is being designed with the specific aim of minimizing the eco-footprint of its residents, and includes plans to become self-sufficient in energy and water production.

The article Green Manhattan argues that densely packed city dwellers have a smaller footprint than those in leafier, more natural looking settings. Population density actually facilitates sustainable design in housing and transport. With their apartments backing against each other (great insulation), nowhere to park a car (trains, buses and feet can work well in a dense city) and using elevators as a regular form of transport, their daily energy use is greatly reduced.

Certain movements in urban design, or urban planning, recognize the role of density, and value of development nodes around transport hubs. In particular, transit-oriented development (or the very similar concepts of New Urbanism a.k.a. Traditional Neighborhood Design) turn many standard practices of car-centered urban planning on their head.

While the individual chooses what mode of transport to use, the design of the city and the policies of the government have a huge impact on how commuters choose to travel.

Public transport, cycling and usage is enhanced by: 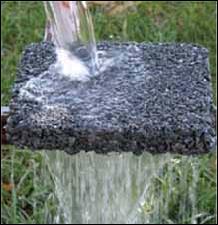 Larger scale and community measures on water include:

Some city governments have developed a name for their green policies. For example:

In general the adoption of policies to create incentives for sustainable behavior is an effective way to create a sustainable city.

Policies restricting density, especially where based on arbitrary measures of floor space to land area, do not encourage good design, and on the contrary encourage waste of space, through roads and landscaping (arguably decorative but not usable). Resisting change, perhaps due to NIMBYism, encourages growth in the same unsustainable patterns that threaten us with climate change and dropping quality of life.

Attempts to build sustainable cities from the ground up, i.e. Ecocities, have been made, for example Bahía de Caráquez. On a smaller level, Ecovillages are a similar idea, while Transition Towns aims to transform existing communities.

There are many individual choices to make as well, to be a green city dweller - see Sustainable city living.