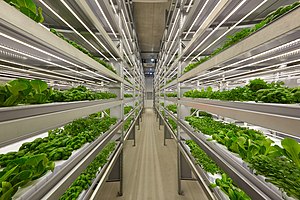 Vertical farming is a theory that, by cultivating agricultural products in skyscrapers, claims to solve the food crisis and offer a green solution to farming. Based on the work of Dickson Despommier, vertical farms would be skyscrapers in urban environments based on some of the principles of greenhouses, built up of floors of crops grown hydroponically year round.[1] Wikipedia:Hydroponics (from the Greek words hydro, water and ponos, labor) is a method of growing plants using mineral nutrient solutions, in water, without soil.[2] In theory, vertical farming would reduce the use of pesticides, herbicides and fungicides by keeping the crops in a controlled environment, and avoids the problems of agricultural run-off by keeping all agricultural activities confined to the vertical farming system.[1] In other words, a vertical farm would double as a water-treatment and waste-recycling facility.[3] Vertical farming advocates also believe that by converting to three dimensional agriculture, the ecosystems that have been consumed by farmland could be returned to their previous state.[4] The projected design could rise over 18 stories and feed 50,000 people from a city block. Despommier's vision was to rid the world of agriculturally transmitted diseases, but in turn seeks to ambitiously solve the world food crisis.[5]

In the not so distant future, the design of cities will likely revolve around the interaction of energy systems and urban structure at various levels of scale. Urban Geography [6] suggests that strategies will include the disposal of solid and liquid waste materials from cities into useful power through biomass technologies and incineration systems.[6] Conceptually, urban farming is not new. The suggestion of the compact city, illustrated by Le Corsier's (1929) ideal city and Soleri's (1969)three-dimensional city, were proposed as high-density, mised-use city in an effort to reduce travel distances.[6] Further, the concept of Urban agriculture is a foundation to urban farming.

Viability for the future[edit | edit source]

Consersation can potentially occur on two major fronts. First, vertical farming can significantly reduce worldwide deforestation in seek of arable land by providing alternative space. Second, conservation occurs by reducing waste, spoilage, and water consumption in comparison to traditional methods.[7] Vertical farming can significantly reduce the land used for agriculture and food production, thereby increasing the potential crop yield. Presently, cropland across the world is approximately equal to the entire landmass of South America. It is predicted that to meet the world population of 2050, an additional landmass the size of Brazil would be needed.[8] By bringing agriculture indoors, crops can be cultivated year-round. This should significantly increase the yield in countries were seasonal changes prevent year-round agriculture. Further, harvesting food in a controlled environment protects the crop from bad weather and natural disasters, making the yearly harvest more dependable.[7]

Currently, funding does not exist to implement vertical farming. The start-up costs of vertical farming are expected to be large and unkwown glitches in the design may decrease its potential.[7]

Vertical farming will encompass a variety of existing techologies into its potential design and methodology. Current discussions involve, but are not limited to, an understanding of the following engineering systems:

A plethora of concept drawings exist for vertical farms. Despommier describes 30 story skyscrapers that exploit different growing techniques on various floors. Solar panels on the outsides of the building and an incinerator for plant waste are to provide energy for the building. City wastewater would be used to irrigate the plants. Artificial light and sunlight provide the energy for photosynthesis. Finally, the system would be expected to have a nursery, control lab and groceries on site.[8]

See this Concept map of a vertical farm (sustainablecitiescollective.com).

It is predicted that energy consumption by vertical farms will be exorbant. Lower level floors would require artificial light sources year round or mechanism to promote photosynthesis. Additional energy would be needed to fuel all levels during darker winter months.[5] Bruce Bugbee, a crop physiologist at Utah State University in Logan, predicts that "We're talking gigawatts of power, just huge amounts of power [to grow crops indoors], compared to free sunlight outside," and Bugbee also notes that "Typical office light is only about one percent as intense as the full sunlight needed to grow crops." [9]

Despommier's outlook is a system that reduces water consumption by 70% compared to traditional agriculture.[10] His website, The Vertical Farm, explains that vertical farming could virtually eliminate agricultural runoff through water recycling, converts wastewater to potable water within the system and could potentially " reduce the incidence of armed conflict over natural resources, such as water and land for agriculture." [11]

A foreseen benefit of vertical farming is a susbstantial cut of transportation costs associated with traditional rural farming. In theory, harvesting in urban skyscrapers would mean that food is distributed locally year-round. Despommier suggests that by bringing agriculture into a controlled, monitored and self-contained environment, the system will reduce spoilage, contamination and energy costs in an effort to offset the infrastructure and energy costs of the proposed system.[8]

Page data
Retrieved from "https://www.appropedia.org/w/index.php?title=Vertical_farming&oldid=636764"
Cookies help us deliver our services. By using our services, you agree to our use of cookies.
Categories:
About Appropedia · Policies · Contact · Content is available under CC-BY-SA-4.0 unless otherwise noted.