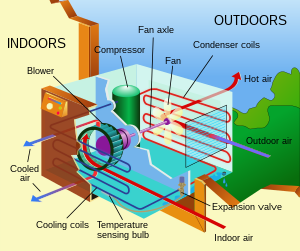 Air conditioners, which typically use vapor-compression refrigeration, range in size from small units used within vehicles or single rooms to massive units that can cool large buildings. Air source heat pumps, which can be used for heating as well as cooling, are becoming increasingly common in cooler climates.

According to the International Energy Agency (IEA), as of 2018, 1.6 billion air conditioning units were installed, which accounted for an estimated 20% of electricity usage in buildings globally with the number expected to grow to 5.6 billion by 2050. The United Nations called for the technology to be made more sustainable to mitigate climate change using techniques including passive cooling, evaporative cooling, selective shading, windcatchers and better thermal insulation. CFC and HCFC refrigerants such as R-12 and R-22, respectively, used within air conditioners have caused damage to the ozone layer, and HFC refrigerants such as R-410a and R-404a, which were designed to replace CFCs and HCFCs, are instead exacerbating climate change. Both issues happen due to the venting of refrigerant to the atmosphere, such as during repairs. HFO refrigerants, used in some if not most new equipment, solve both issues with an ozone damage potential (ODP) of zero and a much lower global warming potential (GWP) in the single or double digits vs. the three or four digits of HFCs.

Air conditioners are one of the most intensive users of electricity - although they do not need to be operated all day, nor all year, in most climates.

Extra energy is used when using heat-producing appliances in an air conditioned room or building. There is not only the energy used by the appliance, but a greater amount of energy to remove the heat from that appliance. Wikipedia:Air conditioning#Energy use states:

Air conditioners being turned on during the hottest days of summer account for the highest peak loads experienced by many cities' electricity infrastructure.[verification needed] Thus much extra capacity needs to be built into the generating equipment, at the expense of many millions of dollars, and it is then only used for a few days per year.

Using a diffuserW which sends air along the ceiling results in the same spread of air for less discharge velocity - meaning a smaller fan and less noise (and we might guess it would give a very slight saving in power usage - unless the air is heated by contact with the ceiling, in certain circumstances[expansion needed]).

In air conditioning the Coandă effect is exploited to increase the throw of a ceiling mounted diffuserW. Because the Coandă effect causes air discharged from the diffuser to "stick" to the ceiling, it travels further before dropping for the same discharge velocity than it would if the diffuser was mounted in free air, without the neighbouring ceiling. Lower discharge velocity means lower noise levels and, in the case of variable air volume (VAV) air conditioning systems, permits greater turn-down ratios. Linear diffusers and slot diffusers that present a greater length of contact with the ceiling exhibit greater Coandă effect.

Page data
Retrieved from "https://www.appropedia.org/w/index.php?title=Air_conditioning&oldid=639176"
Cookies help us deliver our services. By using our services, you agree to our use of cookies.
Categories:
Maintenance categories:
Comments
Privacy policy · About Appropedia · Disclaimers · Mobile view · Content is available under CC-BY-SA-4.0 unless otherwise noted.
</html