From Appropedia
Redirected from Stockholm 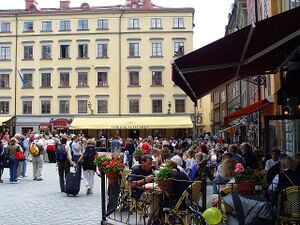 Stockholm (Swedish: [ˈstɔ̂kː(h)ɔlm] (listen)) is the capital and largest city of Sweden as well as the largest urban area in Scandinavia. Approximately 980,000 people live in the municipality, with 1.6 million in the urban area, and 2.4 million in the metropolitan area. The city stretches across fourteen islands where Lake Mälaren flows into the Baltic Sea. Outside the city to the east, and along the coast, is the island chain of the Stockholm archipelago. The area has been settled since the Stone Age, in the 6th millennium BC, and was founded as a city in 1252 by Swedish statesman Birger Jarl. It is also the county seat of Stockholm County. For several hundred years, Stockholm was the capital of Finland as well (Finnish: Tukholma), which then was a part of Sweden. The population of the municipality of Stockholm is expected to reach one million people in 2024.

Between April and October, during the warmer months, it is possible to rent Stockholm City Bikes by purchasing a bike card online or through retailers. Cards allow users to rent bikes from any Stockholm City Bikes stand spread across the city and return them in any stand. There are two types of cards: the Season Card (valid from 1 April to 31 October) and the 3-day card. When their validity runs out they can be reactivated and are therefore reusable. Bikes can be used for up to three hours per loan and can be rented from Monday to Sunday from 6 am to 10 pm.

Stockholm Starts a Friendly Rivalry Over Car-Free Planning, May 12[1]

Stockholm on track to be fossil fuel free, December 8[6]

Bee Urban is pollinating Stockholm, May 21[7]

Stockholm, which has one of the most advanced networks of cycling paths in the world, with over 4,000 km of bicycle lanes per 1,000 sq. km., named as 'Europe's best city for commuters', May 28[9]

The Conference on the Human Environment, held in Stockholm, Sweden 5 to 16 June, the first of a series of world environmental conferences.[10]

Stockholm is one of the cleanest capitals in the world. The city was granted the 2010 European Green Capital Award by the EU Commission; this was Europe's first "green capital". Applicant cities were evaluated in several ways: climate change, local transport, public green areas, air quality, noise, waste, water consumption, waste water treatment, sustainable utilisation of land, biodiversity and environmental management. Out of 35 participant cities, eight finalists were chosen: Stockholm, Amsterdam, Bristol, Copenhagen, Freiburg, Hamburg, Münster, and Oslo. Some of the reasons why Stockholm won the 2010 European Green Capital Award were: its integrated administrative system, which ensures that environmental aspects are considered in budgets, operational planning, reporting, and monitoring; its cut in carbon dioxide emissions by 25% per capita in ten years; and its decision towards being fossil fuel free by 2050. Stockholm has long demonstrated concern for the environment. The city's environmental program is the fifth since the first one was established in the mid-1970s. In 2011, Stockholm passed the title of European Green Capital to Hamburg, Germany.

From Wikipedia:Stockholm § Green city with a national urban park

At the beginning of 2010, Stockholm launched the program Professional Study Visits in order to share the city's green best practices. The program provides visitors with the opportunity to learn how to address issues such as waste management, urban planning, carbon dioxide emissions, and sustainable and efficient transportation system, among others.

According to the European Cities Monitor 2010, Stockholm is the best city in terms of freedom from pollution. Surrounded by 219 nature reserves, Stockholm has around 1,000 green spaces, which corresponds to 30% of the city's area. Founded in 1995, the Royal National City Park is the world's first legally protected "national urban park". For a description of the formation process, value assets and implementation of the legal protection of The Royal National Urban Park, see Schantz 2006 The water in Stockholm is so clean that people can dive and fish in the centre of the city. The waters of downtown Stockholm serve as spawning grounds for multiple fish species including trout and salmon, though human intervention is needed to keep populations up. Regarding CO2 emissions, the government's target is that Stockholm will be CO2 free before 2050.

Page data
Retrieved from "https://www.appropedia.org/w/index.php?title=Stockholm_community_action&oldid=665115"
Cookies help us deliver our services. By using our services, you agree to our use of cookies.
Categories:
About Appropedia · Policies · Contact · Content is available under CC-BY-SA-4.0 unless otherwise noted.