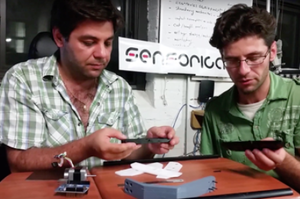 Open source hardware (OSH) development has been gaining momentum in recent years with several communities attempting to formalise its various aspects. One particularly promising area is the design of open source scientific hardware. Previous work has shown that the use of digital fabrication techniques has allowed scientists to make high-quality scientific tools for 1-10% of the cost of commercial proprietary equipment. Open source scientific hardware (and the open science movement in which it is situated) is part of a larger social shift characterised by open production methodologies, and decentralised and distributed models of collaboration. Design is also increasingly involved in supporting open production, both in terms of designing and developing technical infrastructures, and in terms of encouraging and sustaining processes that promote collaboration and openness.

This paper builds on the work of open source scientific hardware and emerging concepts in participatory design with a focus on commons-based peer production. How do open production environments foster engagement and innovation? Can distributed modes of production support the design of open source scientific hardware? To answer these questions, a design research case study was undertaken to investigate the design and social impact of a collaboratively designed open source hardware instrument developed by Sensorica, an open value network, in collaboration with an academic laboratory. The project's goal was to engage with makers and communities around the world in order to encourage its wider adoption, future evolution and continued development.