From Appropedia
Redirected from Arkansas 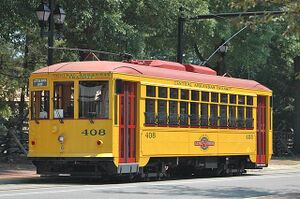 Arkansas ( AR-kən-saw) is a landlocked state in the South Central United States. It is bordered by Missouri to the north, Tennessee and Mississippi to the east, Louisiana to the south, and Texas and Oklahoma to the west. Its name is from the Osage language, a Dhegiha Siouan language, and referred to their relatives, the Quapaw people. The state's diverse geography ranges from the mountainous regions of the Ozark and Ouachita Mountains, which make up the U.S. Interior Highlands, to the densely forested land in the south known as the Arkansas Timberlands, to the eastern lowlands along the Mississippi River and the Arkansas Delta.

Arkansas is the 29th largest by area and the 34th most populous state, with a population of just over 3 million at the 2020 census. The capital and most populous city is Little Rock, in the central part of the state, a hub for transportation, business, culture, and government. The northwestern corner of the state, including the Fayetteville–Springdale–Rogers Metropolitan Area and Fort Smith metropolitan area, is a population, education, and economic center. The largest city in the state's eastern part is Jonesboro. The largest city in the state's southeastern part is Pine Bluff.

Previously part of French Louisiana and the Louisiana Purchase, the Territory of Arkansas was admitted to the Union as the 25th state on June 15, 1836. Much of the Delta had been developed for cotton plantations, and landowners there largely depended on enslaved African Americans' labor. In 1861, Arkansas seceded from the United States and joined the Confederate States of America during the American Civil War. On returning to the Union in 1868, Arkansas continued to suffer economically, due to its overreliance on the large-scale plantation economy. Cotton remained the leading commodity crop, and the cotton market declined. Because farmers and businessmen did not diversify and there was little industrial investment, the state fell behind in economic opportunity. In the late 19th century, the state instituted various Jim Crow laws to disenfranchise and segregate the African-American population. During the civil rights movement of the 1950s and 1960s, Arkansas and particularly Little Rock were major battlegrounds for efforts to integrate schools.

White interests dominated Arkansas's politics, with disfranchisement of African Americans and refusal to reapportion the legislature. Only after the civil rights movement and federal legislation passed were more African Americans able to vote. The Supreme Court overturned rural domination in the South and other states that had refused to reapportion their state legislatures or retained rules based on geographic districts. In the landmark ruling of one man, one vote, it held that states had to organize their legislatures by districts that held approximately equal populations, and that these had to be redefined as necessary after each decade's census.

Following World War II in the 1940s, Arkansas began to diversify its economy and see prosperity. During the 1960s, the state became the base of the Walmart corporation, the world's largest company by revenue, headquartered in Bentonville. In the 21st century, Arkansas's economy is based on service industries, aircraft, poultry, steel, and tourism, along with important commodity crops of cotton, soybeans and rice.