This was a research project in partnership between Engr308 Technology and the Environment and the City of Arcata, during Fall 2010, to explore the impacts of single use plastic bags in Arcata, Humboldt County, California. This research helps to educate arguments over the merits of a single use plastic bag ban. This article gives more background and the following documents starts with findings then works through much of the supporting information. 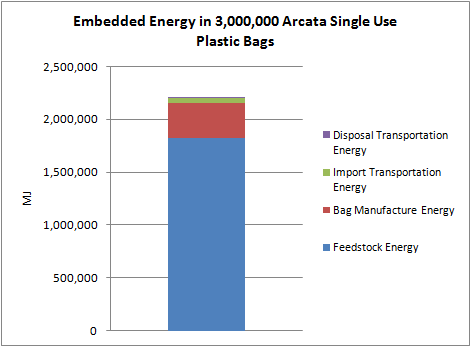 The result of a brief study by the course showed that Arcatans use between 3 and 5 million single use plastic bags per year. A more in-depth study of impacts, conducted by the course, resulted in this spreadsheet that allows a user to enter values such as shipping companies, shipping ports, manufacturers, number of bags used, number of bags recycled, grid mix of manufacturer, bag materials, etc. to calculate embedded energy and emissions. At the low end of 3 million single use plastic bags per year (and other average assumptions shown in the spreadsheet), the impacts of Arcata's single use plastic bag yearly habit include:

These impacts vary greatly depending on assumptions, which can be changed in the spreadsheet. This does not include other impacts such as quality of life, impacts on fishing, impacts on wastewater treatment pumps, and animal deaths. The spreadsheet also includes comparisons such as:

Estimate of Energy Consumption by Plastic Bags in the Entire US, based on 500 Bags per Capita, per Year[2]

In other words: Per kg of plastic, about 6 kg carbon dioxide is created during production and incineration.[3]

Energy used for one plastic bag:

The following table comes from the Boustead report, a life cycle analysis of paper and plastic bags conducted in 2007. The report was prepared for the Progressive Bag Alliance, and was conducted by Boustead Consulting and Associates. The report was reviewed by a professor of chemical engineering at North Carolina State University.[5]

The environmental justice movement was begun in recognition of the fact that: "Environmental regulations have not uniformly benefited all members of society. People of color (African Americans, Latinos, and Native Americans) are disproportionately harmed by industrial toxins on their jobs and in their neighborhoods. These groups must contend with dirty air and drinking water- the byproducts of municipal landfills, incinerators, polluting industries, and hazardous waste treatment storage, and disposal facilities."[12] Environmental justice issues also cross international borders. Many cheap products we buy in the United States are manufactured in countries that do not have stringent, or any, environmental regulations. Thus, the populations of those exporting countries are bearing the external costs associated with the production of materials we consume. Most plastic shopping bags are made in countries with lax environmental regulations, like China.[13]

This work in the news[edit | edit source]

Page data
Retrieved from "https://www.appropedia.org/w/index.php?title=Arcata_plastic_bags&oldid=632659"
Cookies help us deliver our services. By using our services, you agree to our use of cookies.
Categories:
Maintenance categories:
Comments
Privacy policy · About Appropedia · Disclaimers · Mobile view · Content is available under CC-BY-SA-4.0 unless otherwise noted.
</html