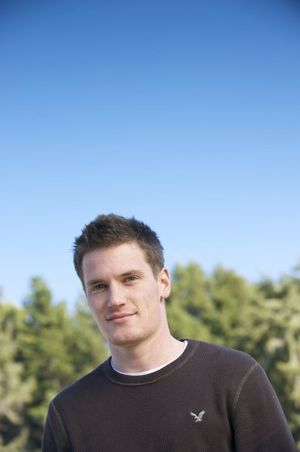 Me on HSU Campus.

I'm 25 and originally from Seattle, WA. My undergraduate degree is in Environmental Policy and have particular interests in natural resource management and sustainable communities within foreign countries. Most of my experience thus far has been in tropical ecosystems. I am an member of MS PHD's Cohort VII and HSU's INRSEP program.

I worked with the Native American and Pacific Islander Research Experience (NAPIRE) during the summer of '09 as a researcher exploring different methods for restoring forest edges in the context of climate change, in Costa Rica. I developed a project at Las Cruces Biological Station in which I took climate measurements (photosynthetic active radiation, soil moisture, humidity, and temperature) and surveyed the species composition at three elevations. I also measured the temperature along a horizontal gradient of a forest edge boarding an abandoned pasture. Using elevation as a proxy for climate change, I suggested that species that are present at all three elevations (among other factors) would be good candidates for restoring forest edges and creating habitat corridors in the face of unpredictable future climate conditions.

In the summer of '10 I chose to pursue research in marine ecology in another tropical location, Indonesia. The Partnerships for International Research and Education (PIRE) project was a collaboration between two American universities (UCLA and Old Dominion University) and several Indonesian colleges including The Indonesian Institute of Sciences and Udayana University. The goal of the project was to form partnerships that would focus on questions fundamental to understanding speciation in marine environments, and address the major biogeographic hypotheses for the origins of high biodiversity in this region. I used DNA replication to compare nucleotide base pairs of the blue spotted stingray (Neotrygon kuhlii) collected throughout Indonesia. I Extracted DNA from fin tissue into a chelex resin, performed PCRs to replicate the CO1 region of the mtDNA region, and sequenced samples. Using this data, I gained an understanding of their dispersal capabilities and gene flow, and mapped its phylogenetic structure. I then presented my results at the Indonesian Biodiversity Research Center Symposium. This information was used to help create conservation policies in the surrounding areas.

Interests in Technology and the Environment[edit | edit source]

Experience in Technology and/or the Environment[edit | edit source]