From Appropedia
Redirected from Washington, D.C. 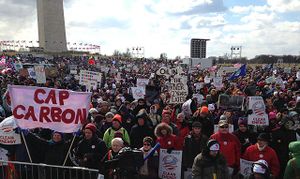 Washington, D.C., formally the District of Columbia, also known as just Washington or simply D.C., is the capital city and federal district of the United States. It is located on the east bank of the Potomac River, which forms its southwestern and southern border with the U.S. state of Virginia, and it shares a land border with the U.S. state of Maryland on its other sides. The city was named for George Washington, a Founding Father and the first president of the United States, and the federal district is named after Columbia, the female personification of the nation. As the seat of the U.S. federal government and several international organizations, the city is an important world political capital. It is one of the most visited cities in the U.S. with over 20 million annual visitors as of 2016.

Greater Greater Washington, devoted to improving the vitality of Washington, DC and the walkable cities and neighborhoods in the Washington metropolitan area

Solar power in Washington, D.C. has been growing in recent years due to new technological improvements and a variety of regulatory actions and financial incentives, especially a 30% tax credit, which unfortunately begins phasing out in 2020 and is reduced to 10% for commercial installations and nothing for residential by 2022.[1] With moderate sun hours per day, and relatively modest utility rates, Washington DC falls on the higher end of years to pay back for solar PV systems, but the District does have a PACE financing program for commercial solar easing the burden with strong lending.[2]

There is a network of 45 miles (72 km) dedicated bicycle lanes around Washington, D.C. and there are 1,300 bicycle racks installed on sidewalks all over the city. An estimated 3.3% of the District's residents biked to work in 2010, and by 2008 the city had the sixth-highest percentage of bike commuters in the United States.[3]

Page data
Retrieved from "https://www.appropedia.org/w/index.php?title=Washington_DC_community_action&oldid=657108"
Cookies help us deliver our services. By using our services, you agree to our use of cookies.
Categories:
About Appropedia · Policies · Contact · Content is available under CC-BY-SA-4.0 unless otherwise noted.