From Appropedia
Redirected from Vermont 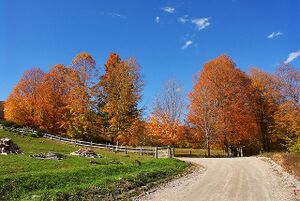 Vermont ( (listen)) is a state in the northeast New England region of the United States. Vermont is bordered by the states of Massachusetts to the south, New Hampshire to the east, and New York to the west, and the Canadian province of Quebec to the north. Admitted to the union in 1791 as the 14th state, it is the only state in New England not bordered by the Atlantic Ocean. According to the 2020 U.S. census, the state has a population of 643,503, ranking it the second least-populated in the U.S. after Wyoming. It is also the nation's sixth-smallest state in area. The state's capital Montpelier is the least-populous state capital in the U.S., while its most-populous city, Burlington, is the least-populous to be a state's largest.

From Wikipedia:Climate change in Vermont

Climate change in Vermont encompasses the effects of climate change, attributed to man-made increases in atmospheric carbon dioxide, in the U.S. state of Vermont.

The state is already seeing effects of climate change that affect its ecosystems, economy and public health. According to the Vermont state government, rainfall has significantly increased in the last 50 years, storms and flooding have increased, and winters have become warmer and shorter. These changes have led to significant impacts on both the winter tourism industry, and a decline in critical agricultural and woodland industries like maple sugaring.

The state openly acknowledges and is developing programs that respond to global warming. Vermont was one of the first states in the United States to adopt greenhouse gas emissions goals in 2006.

In 2006, the state of Vermont was one of the first states in the United States to set greenhouse gas emission goals. Vermont's green energy programs, such as Efficiency Vermont and incentives for use of clean energy, have been effective at changing the mix of energy used in the state. Green Mountain Power, the main provider of energy in the state, is 60% renewable and 90% carbon free.

The state recognizes the need to invest in adaptation, especially since much of the state's infrastructure, housing stock, and economy were developed with much cooler environments.

Green Mountain National Forest is a national forest located in Vermont, a temperate broadleaf and mixed forest typical of the New England/Acadian forests ecoregion. The forest supports a variety of wildlife, including beaver, moose, coyote, black bear, white-tailed deer, wild turkey, and ruffed grouse. The forest, being situated in Vermont's Green Mountains, has been referred to as the granite backbone of the state.

Vermont Electric Cooperative's core mission is to supply safe, affordable, and reliable energy services to its members. VEC not only supplies electricity to members, but also offers a range of programs including bill credits for the purchase of certain electric appliances and devices including electric vehicles, plug-in electric vehicles, heat pumps, heat pump hot water heaters, pellet stoves, electric forklifts, and Zero Energy Modular homes. In December 2016, Vermont Electric Cooperative launched Co-op Community Solar, a program under which members can sponsor solar panels in community solar arrays. Members pay an upfront payment for a term of either ten or twenty years and get a fixed monthly credit on their electric bill. Over the term, the total value of the bill credits exceeds the value of the upfront payment.

From Wikipedia:Wind power in Vermont

In 2021, Wind power in Vermont consisted of five utility-scale wind farms with a total capacity of 149 megawatts (MW). They were responsible for one-sixth of in-state electricity generation in 2019.

No other wind farms are in the pipeline as of January 2020.

The first megawatt turbine in the world was installed in Vermont, at Grandpa's Knob in 1941.

From Wikipedia:Solar power in Vermont

Solar power in Vermont provides almost 11% of the state's in-state electricity production as of 2018. A 2009 study indicated that distributed solar on rooftops can provide 18% of all electricity used in Vermont. A 2012 estimate suggests that a typical 5 kW system costing $25,000 before credits and utility savings will pay for itself in 10 years, and generate a profit of $34,956 over the rest of its 25-year life.

Net metering is available for up to at least 500 kW generation, but is capped at 15% of utilities peak demand. Excess generation is rolled over each month but is lost once each year. Group net metering is also allowed. Vermont is given an A for net metering and a C for interconnection. A feed-in tariff was created in 2009, but is limited to 50 MW and is fully subscribed. The cap increases by 5 to 10 MW/year starting in 2013 until it reaches 127.5 MW in 2022. It is available for solar, wind, methane, and biomass. Seven solar projects are receiving payments, of $0.30/kWh, for 25 years.

Vermont Energy Investment Corporation or VEIC is a non-profit organization in Chittenden County, Vermont that seeks to reduce the economic and environmental costs of energy consumption through energy efficiency and renewable energy adoption. Since its founding in 1986, the organization has been involved in designing energy efficiency and renewable energy programs in North America and worldwide.

The Vermont Foodbank is the largest anti-hunger organization in Vermont.

Started in 1986, the Vermont Foodbank provides charitable food to more than 280 food shelves, meal sites, shelters, senior centers and after-school programs throughout Vermont. According to their website, the Foodbank distributed more than 8.2 million pounds of nutritious food to as many as 86,000 hungry Vermonters in 2013.

Sugar Mountain Farm is a 70 acres (28 ha) family-operated pig farm in West Topsham, Vermont with approximately 200-400 pastured-raised pigs. The pigs are fed acid whey from a nearby dairy farm, apple pomace leftovers from a nearby cider facility, vegetables, and spent barley from a brewery as opposed to grain.

The company has stated that it uses "natural farming methods", also known as permaculture. They only use antibiotics if a pig gets sick. The farm does not use castration to control boar taint, relying on other methods such as selective breeding, diet, and pasturing males away from females. They raised sheep and pigs until 2009, when the farm focused on pork due to lower demand for lamb and wool.

May 1 Green Up Day, Green Up Vermont

Green Up Day, observed annually on the first Saturday of May, is a statewide effort in the US state of Vermont to clean up roadside trash.

"When democracy is conducted at a human scale, it helps create what looks like superhuman wisdom." How the state of Vermont does it, Mar 9[1]

Page data
Retrieved from "https://www.appropedia.org/w/index.php?title=Vermont_community_action&oldid=668108"
Cookies help us deliver our services. By using our services, you agree to our use of cookies.
Categories:
About Appropedia · Policies · Contact · Content is available under CC-BY-SA-4.0 unless otherwise noted.