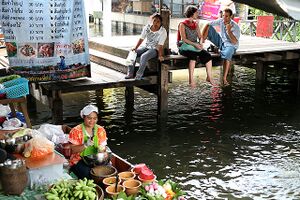 Thailand ( TY-land, TY-lənd), historically known as Siam () and officially the Kingdom of Thailand, is a country in Southeast Asia, located at the centre of the Indochinese Peninsula, spanning 513,120 square kilometres (198,120 sq mi), with a population of almost 70 million. The country is bordered to the north by Myanmar and Laos, to the east by Laos and Cambodia, to the south by the Gulf of Thailand and Malaysia, and to the west by the Andaman Sea and the extremity of Myanmar. Thailand also shares maritime borders with Vietnam to the southeast, and Indonesia and India to the southwest. Bangkok is the nation's capital and largest city.

Thailand is among the world's ten countries that are most exposed to climate change. In particular, it is highly vulnerable to rising sea levels and extreme weather events. W

From Elephant Nature Park in Thailand.[edit] 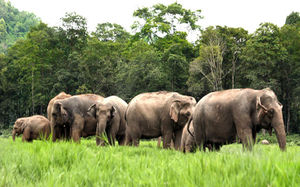 A herd of elephants roam freely in the spacious 250 acre land at Elephant Nature Park, Thailand.

Though Thai elephants are highly admired throughout the country and in Thai history, the threat against these elephants comes directly from those who most value them, the human explicators. Poaching for ivory, elephant calves, illegal logging and roaming city streets for money are just some of the few threats the elephants face. Elephant Nature Park sees this these growing threats and works against them to help restore the health, well-being, safety, and environment for the elephants of its country, Thailand.[1]

Rain Tree is continuously looking for new opportunities and ideas as to how to better help rural people. The staff at the foundation are from various local ethnic tribal groups in Thailand.

From Urban agriculture in Bangkok.[edit]

In early 2000, urban gardens were started in Bangkok under the direction of the NGO, Thailand Environment Institute (TEI). Bangkok has a population of 12 million, and 39% of the land in the city vacant due to rapid expansion of the 1960's to 80's.

The two urban gardens initiated by TEI are in Bangkok Noi and Bangkapi and the stated main tasks were to:

Worried about the looming water shortage in many parts of Thailand, writer Veera Prateepchaikul calls for the drafting and implementation of a comprehensive water policy in the country,[6] February 13

From Wikipedia:Environmental issues in Thailand

Thailand's dramatic economic growth has caused numerous environmental issues. The country faces problems with air, declining wildlife populations, deforestation, soil erosion, water scarcity, and waste issues. According to a 2004 indicator, the cost of air and water pollution for the country scales up to approximately 1.6–2.6% of GDP per year. As such, Thailand's economic growth has come at great cost in damage to its people and environment.

Thailand's Twelfth National Economic and Social Development Plan (2017-2021) warns that, "At present the country's natural resources and environmental quality are deteriorating, and have become a weakness in maintaining the basis of production, services and sustainable living. A large volume of the natural resources stock has been utilized for development, resulting in their continuous degradation. The forests have been depleted, the soil has become infertile, and biodiversity has been threatened. While exhibiting a future risk of water shortages, the existing supply of water has not been able to meet the demands of the various sectors. Conflicts over the use of natural resources stem from the unfair allocation of access and exploitation. Moreover, environmental problems have risen along with economic growth and urbanization. All of these problems have affected the quality of life and have added greater economic costs.": 14–15, 132

Page data
Retrieved from "https://www.appropedia.org/w/index.php?title=Thailand_community_action&oldid=656420"
Cookies help us deliver our services. By using our services, you agree to our use of cookies.
Categories:
About Appropedia · Policies · Contact · Content is available under CC-BY-SA-4.0 unless otherwise noted.