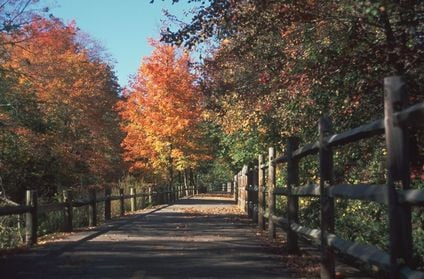 The Blackstone River Greenway in October 2006, approximately one mile south of the Martin St. Bridge

Bicycle paths: The East Bay Bike Path stretches from Providence to Bristol along the eastern shore of Narragansett Bay, while the Blackstone River Bikeway will eventually link Providence and Worcester. In 2011, Rhode Island completed work on a marked on-road bicycle path through Pawtucket and Providence, connecting the East Bay Bike Path with the Blackstone River Bikeway, completing a 33.5 miles (53.9 km) bicycle route through the eastern side of the state. The William C. O'Neill Bike Path (commonly known as the South County Bike Path) is a 6-mile path through South Kingstown and Narragansett. The 14-mile Washington Secondary Bike Path stretches from Cranston to Coventry, and the 2-mile Ten Mile River Greenway path runs through East Providence and Pawtucket. [1]

Southside Community Land Trust, a 501(c)(3) non-profit organization with a mission to provide access to land, education and other resources necessary for people in the Greater Providence area to grow food in environmentally sustainable ways as a means to creating a food system where locally produced, affordable and nutritious food is available to all. It was established in 1981. W

In the Providence Bay Area, the Fertile Underground Natural Cooperative is working to get a catering truck on the road. This truck will take food from farms and supermarkets and offer the raw, natural ingredients for free, while selling the prepared food. The goal of this project is to reach places that have limited access to fresh food and provide cooking demonstrations using seasonal produce. [2]