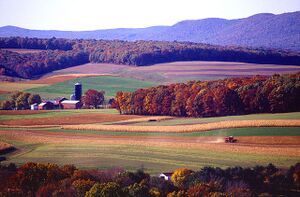 City of Asylum, nonprofit in Pittsburgh

Philadelphia's Indego bike-share system offers affordable and convenient access to two-wheeled transportation. With 120 bike stations throughout the city comprising more than 1,200 bikes, the company has announced plans to double capacity to more than 250 stations in the next few years and expand to serve an additional 15 square miles of the city. The mayor recently announced plans to build 20 miles of separated bike lanes in the next two years, making biking safer throughout the city.[2]

At over 11,000 residents per square mile, Philadelphia is among the most densely populated cities in the country. And those miles offer a rich history of community, shared spaces, and pooled resources. From thriving open markets to urban gardens and a wealth of public art, the metropolis has vast resources to help residents make do without the need for car ownership, large homes, or mass personal consumption.[3]

The Mutual Aid Network of the Lehigh Valley addresses the social determinants of health of communities' most vulnerable members, including formerly incarcerated people, juveniles aging out of the foster care system, homeless populations, individuals recovering from addiction, and newly settled refugees. This project address tackles these issues by tackling social isolation, one of the key factors that contributes to poor life and health outcomes.[4]

The Free Library of Philadelphia has more than books for loan. From a health lending library with food scales and blood pressure cuffs to kitchen cupboards stocked with cataloged cake pans and a musical instrument collection with banjos, steel drums, and keyboards, you can find almost anything you need to borrow among its 54 branches. Philly even has a "Tiebrary" as part of one branch's Job Readiness Lab.[5]

Lots to Love, "a guide for community organizations and residents who are interested in transforming vacant lots into well-loved spaces." Strengthening and greening the Pittsburgh region.

From isolation to interdependence: How Reimagining the Civic Commons is connecting Philadelphia, Nov 8 [8]

Pittsburgh is using 10 goats and their donkey guardian to cut unruly grass, March 10 [10]

Tracks from railroads' past seen as path to future, August 16 [11]

Transition Town Media opens a FreeStore in Media, May 1 [14]

The New Philadelphia Story Is About Green Infrastructure, December 18 [15]

Green Justice Philly, new coalition to protect Philadelphians' health and safety from the city's fossil fuel industry, and to create a sustainable 21st century economy that will support clean air and water and healthy communities.[16]