From Appropedia
Redirected from Ohio 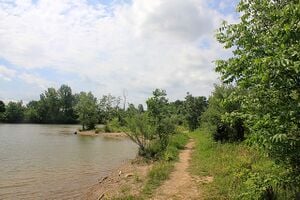 Ohio ( (listen)) is a state in the Midwestern region of the United States. Of the fifty U.S. states, it is the 34th-largest by area, and with a population of nearly 11.8 million, is the seventh-most populous and tenth-most densely populated. The state's capital and largest city is Columbus, with the Columbus metro area, Greater Cincinnati, and Greater Cleveland being the largest metropolitan areas. Ohio is bordered by Lake Erie to the north, Pennsylvania to the east, West Virginia to the southeast, Kentucky to the southwest, Indiana to the west, and Michigan to the northwest. Ohio is historically known as the "Buckeye State" after its Ohio buckeye trees, and Ohioans are also known as "Buckeyes". Its state flag is the only non-rectangular flag of all the U.S. states.

The Trimble Community Forest or Trimble Township Community Forest is a 1,200-acre (4.9 km2) forest preserve owned by the Appalachia Ohio Alliance, a land trust located in southeast Ohio. Formerly called Taylor Ridge, it was purchased in 2006 from the Sunday Creek Coal Company, and was formerly part of the Sunday Creek State Wildlife Area. The land has a long history of coal, oil, natural gas, and timber production. The AOA negotiated with the Trimble Township Trustees on its use before purchase. It is located in Athens County, Ohio, south of Ohio State Route 78, between Glouster, Ohio and Murray City, Ohio.

The forest is used as a land lab by nearby Trimble High School and Trimble Middle School. The land lab area is known as the Trimble Tomcat Environmental Learning Lab. The Ohio Division of Wildlife provides assistance to a local citizens committee that manages the forest.

From Wikipedia:Solar power in Ohio

Solar power in Ohio has been increasing, as the cost of photovoltaics has decreased. Ohio installed 10 MW of solar in 2015. Ohio adopted a net metering rule which allows any customer generating up to 25 kW to use net metering, with the kilowatt hour surplus rolled over each month, and paid by the utility once a year at the generation rate upon request. For hospitals there is no limit on size, but two meters are required, one for generation, the other for utility supplied power.

In 2010, the 12 MW solar farm in Upper Sandusky was the largest solar farm in the state. It was later surpassed by the 20MW DG AMP Solar Bowling Green farm, which was completed in January 2017.

The First Solar factory in Perrysburg can produce almost 600 MW of panels per year.

Costs have decreased to the point that the average consumer may save approximately $17,527 over a 20-year period by installing solar panels. Euclid's City Hall and library installed solar panels and expects to save $25,000 over the next 15 years. The panels were installed at no cost to the city by Ohio Cooperative Solar, which is leasing the rooftops.

From Wikipedia:Wind power in Ohio

Wind power in Ohio has a long history, and as of 2016, Ohio had 545 megawatts (MW) of utility-scale wind power installations installed, responsible for 1.1% of in-state electricity generated. Over 1000 MW more were under construction or pending approval. Some installations have become tourist attractions. There has been a sudden increase in generating capacity, as total wind power capacity in the state was just 9.7 MW in 2010. By 2019, there were 738 MW of capacity, which generated 1.71% of Ohio's electricity.

Ohio has a highly developed network of signed state bicycle routes. Many of them follow rail trails, with conversion ongoing. The Ohio to Erie Trail (route 1) connects Cincinnati, Columbus, and Cleveland. U.S. Bicycle Route 50 traverses Ohio from Steubenville to the Indiana state line outside Richmond. W

Ohio has several long-distance hiking trails, the most prominent of which is the Buckeye Trail which extends 1,444 mi (2,324 km) in a loop around the state of Ohio. Part of it is on roads and part is on wooded trail. Additionally, the North Country Trail (the longest of the eleven National Scenic Trails authorized by Congress) and the American Discovery Trail (a system of recreational trails and roads that collectively form a coast-to-coast route across the mid-tier of the United States) pass through Ohio. Much of these two trails coincide with the Buckeye Trail. W

The Evergreen Cooperatives are a connected group of worker-owned cooperatives in Cleveland, Ohio, USA. They are committed to local, worker-owned job creation; sustainable, green and democratic workplaces; and community economic development.

People's Liberty, "philanthropic lab that brings together civic-minded talent to address challenges and uncover opportunities to accelerate the positive transformation of Greater Cincinnati. People's Liberty invests directly in individuals through funding and mentorship, creating a new, replicable model for grantmakers in other cities."

This Cincinnati Foundation Offers Residents $100,000 To Quit Their Jobs And Make A Difference, Jun 16[2]

Kenmore prepares for 3rd Akron Better Block this summer, May 12[3]

The Cincinnati experiment: can 'citizen philanthropy' improve a city? Aug 30[6]

Cincinnati's experiment with an economy that works for everyone, August 6[8]

Page data
Retrieved from "https://www.appropedia.org/w/index.php?title=Ohio_community_action&oldid=668133"
Cookies help us deliver our services. By using our services, you agree to our use of cookies.
Categories:
About Appropedia · Policies · Contact · Content is available under CC-BY-SA-4.0 unless otherwise noted.