From Appropedia
Redirected from North Carolina 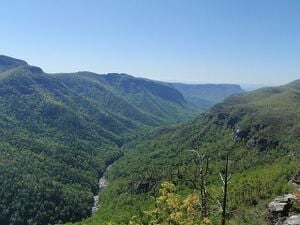 Following Hurricane Florence, Elon University conducted a poll exploring public opinions on climate change. It found that 80 percent of North Carolinians though that North Carolina's coastal communities would be negatively affected by climate change in the next decade. Sixty-two percent supported consideration of climate change predictions in local planning and ordinances, 72 percent supported restriction of real-estate development in flood-prone areas, and over half agreed that hurricanes were increasing in severity.

The city of Charlotte passed a plan to "emit nearly zero carbon from its buildings and vehicle fleet by 2030 and lower the per-capita carbon emissions from Charlotteans by a factor of six." Two days after the plan was passed by the city council, Michael Bloomberg announced that Charlotte was the winner of the American Cities Climate Challenge.

In fall of 2016, the University of North Carolina at Chapel Hill unrolled the "Three Zeroes Initiative," which is the university's commitment to reduce to zero the net usage of water, the amount of waste in landfills, and the net amount of greenhouse gas emissions.

In 2016, the city of Asheville, in cooperation with the University of North Carolina at Asheville's National Environmental Modeling and Analysis Center, began work on a climate resiliency assessment, designed to "lessen the impacts of future extreme weather and climate change." Asheville has earned the moniker the "Climate City" for its housing the headquarters of the National Centers for Environmental Information (the largest repository of environmental data in the world), the U.S. Air Force's 14th Weather Squadron ("which provides climate services to the defense and intelligence communities"), and also The Collider, a nonprofit that "is the first entrepreneurship and innovation center in the nation built to support startups – across almost every sector – that use data to help the world become more resilient to climate change."

In 2012, in response to a study by the United States Geological Survey which predicts accelerating sea level rise, the legislature of North Carolina "passed a law requiring that projected rates of sea level rise be calculated on historical trends and not include accelerated rates of increase."

A July 2019 law revised local land-use and planning requirements. Comprehensive plans that incorporate flood risk will now be required at the local level.

In 2020, the North Carolina Office of Recovery and Resiliency Planning is preparing a "resilience quick start guide" for local communities, to "build resilience into routine decisions such as infrastructure upgrades or zoning rulings."

From Wikipedia:Climate change in North Carolina

Like many land conservancies, PLC receives its funding from multiple sources. One notable source was mitigation for the 2014 Dan River coal ash spill.

The North Carolina Coastal Federation is a nonprofit organization that works with coastal residents and visitors to protect and restore the beautiful and productive N.C. coast. The four main areas in which the federation operates include: coastal advocacy; environmental education; habitat and water quality restoration and preservation; and support in the improvement and enforcement of environmental laws. The federation headquarters are located in Newport (Ocean), North Carolina, with regional offices in Wanchese and Wrightsville Beach, North Carolina. The federation is currently a member of Restore America's Estuaries (RAE).

The Bald Head Island Conservancy (BHIC) is a non-profit organization founded November 7, 1983. BHIC's mission is barrier island conservation, preservation and education. It is located in the Smith Island Complex in Brunswick County, North Carolina, which includes Bald Head Island, Middle and Bluff Islands, all of which are bounded by the Cape Fear River and the Atlantic Ocean. BHIC sponsors and facilitates scientific research that benefits coastal communities and provides numerous recreational and educational activities for students, educators, visitors, and residents. In coordination with various organizations, partnerships and collaborations, the Conservancy has led the nation in conservation and research efforts and is uniquely poised to become a leader in Barrier Island Conservation world-wide.

From Wikipedia:Solar power in North Carolina

Solar power in North Carolina has been increasing rapidly, from less than 1 MW (megawatts) in 2007 to 6,152 MW in 2019, and has the second-largest installed PV capacity of all U.S. states. SunEdison built a 17.2-megawatt solar farm in Davidson County.

Because of declining solar panel costs, a 30 percent federal grant known as a 1603 grant was available through December 31, 2011, and a 30 percent tax credit is available through 2019 (declining to 10% by 2022). The federal tax credit is in addition to any local incentives and pays for the cost of installation, which can be rolled over if fewer taxes are owed that year. The difference between a tax deduction and a tax credit is substantial, as a deduction depends on your tax rate to determine your savings, but a tax credit is directly available to repay the cost of installation. A 2012 estimate indicated that a typical 5 kW solar array would pay for itself in 6 years, and thereafter generate a substantial profit. In addition to federal incentives, the state has a Renewable Portfolio Standard of 12.5% by 2021 and a state renewable energy tax credit, both of which have been credited with boosting solar installations.

A 2018 Smithsonian Magazine article described North Carolina as likely being the national leader in the "solar shepherd phenomenon" – combining sheep farming with solar power plants to reduce the high costs of grass trimming.

According to a report from the Solar Energy Industries Association, as of June 2019, North Carolina generates 5.81% of its electricity through solar power, and ranks second (up from 3rd in 2018) in total installed photovoltaics.

From Wikipedia:Wind power in North Carolina

Wind power in North Carolina is found along the coastal areas in the east and mountain regions in the western part of the state. The state has significant offshore wind resources. In 2015, small scale wind turbine projects were found throughout the state. In 2016, North Carolina's first large scale wind project, and the first in the southeastern U.S., was completed near Elizabeth City.

How do you improve a neighborhood? In Belmont, looking to residents for answers, Jul 13[1]

After Decades in a Food Desert, These Neighbors Are Building a $2 Million Co-op—And They Own It, Nov 12[2]

Page data
Retrieved from "https://www.appropedia.org/w/index.php?title=North_Carolina_community_action&oldid=667904"
Cookies help us deliver our services. By using our services, you agree to our use of cookies.
Categories:
About Appropedia · Policies · Contact · Content is available under CC-BY-SA-4.0 unless otherwise noted.