From Appropedia
Redirected from New Mexico 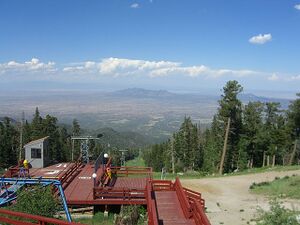 New Mexico (Spanish: Nuevo México [ˈnweβo ˈmexiko] (listen); Navajo: Yootó Hahoodzo [jòːtʰó hɑ́hòːtsò]; Classical Nahuatl: Yancuic Mexico [jankʷik meːʃiʔko]) is a state in the Southwestern United States. It is one of the Mountain States of the southern Rocky Mountains, sharing the Four Corners region of the western U.S. with Utah, Colorado, and Arizona, and bordering Texas to the east and southeast, Oklahoma to the northeast, and the Mexican states of Chihuahua and Sonora to the south. The state capital is Santa Fe, which is the oldest capital in the U.S., founded in 1610 as the government seat of Nuevo México in New Spain; the largest city is Albuquerque (1706).

New Mexico is the fifth-largest of the fifty states, but with just over 2.1 million residents, ranks 36th in population and 46th in population density. Its climate and geography are highly varied, ranging from forested mountains to sparse deserts; the northern and eastern regions exhibit a colder alpine climate, while the west and south are warmer and more arid. The Rio Grande and its fertile valley runs from north-to-south, creating a riparian climate through the center of the state that supports a bosque habitat and distinct Albuquerque Basin climate. One–third of New Mexico's land is federally owned, and the state hosts many protected wilderness areas and national monuments, including three UNESCO World Heritage Sites, the most of any state.

New Mexico is a major producer of greenhouse gases. A study by Colorado State University showed that the state's oil and gas industry generated 60 million metric tons of greenhouse gases in 2018, over four times greater than previously estimated. The fossil fuels sector accounted for over half the state's overall emissions, which totaled 113.6 million metric tons, about 1.8% of the country's total and more than twice the national average per capita. The New Mexico government has responded with efforts to regulate industrial emissions, promote renewable energy, and incentivize the use of electric vehicles. W

In January 2019, Governor Michelle Lujan Grisham signed an executive order on addressing climate change and energy waste prevention. From this order, New Mexico joined the United States Climate Alliance with a goal of lowering greenhouse gas emissions by 45% from 2005 levels by 2030. In addition a Climate Change Task Force was charged with producing a New Mexico Climate Strategy.

According to the United States Environmental Protection Agency, "New Mexico's climate is changing. Most of the state has warmed at least one degree (F) in the last century. Throughout the southwestern United States, heat waves are becoming more common, and snow is melting earlier in spring. In the coming decades, our changing climate is likely to decrease the flow of water in the Colorado, Rio Grande, and other rivers; threaten the health of livestock; increase the frequency and intensity of wildfires; and convert some rangelands to desert". W

"Climate change threatens natural resources and public health of tribal communities. Rising temperatures and increasing drought are likely to decrease the availability of certain fish, game, and wild plants on which the Navajo and other tribes have relied for generations. Water may be less available for domestic consumption, especially for those who are not served by either municipal systems or reliable wells, which includes about 30 percent of the people on the Navajo Nation, who must haul water to meet daily needs. Recurring drought and rising temperatures may also degrade the land itself. On the Arizona portion of the Navajo Nation, for example, the Great Falls Dune Field has advanced almost a mile in the last 60 years, threatening roads, homes, and grazing areas. Extreme heat may also create health problems for those without electricity, including about 40 percent of the people on the Navajo reservation.

The Rio Grande Nature Center State Park is a New Mexico State Park located adjacent to the Rio Grande in Albuquerque, New Mexico, USA. The Rio Grande Nature Center is a 38-acre urban wildlife preserve established in 1982. About two thirds of the grounds of the Park are set aside as habitat for wildlife. The remaining acreage contains a visitors center, two gardens, several wildlife viewing areas, an education building and a building housing the non-profit Wildlife Rescue, Inc. There are four constructed ponds which provide habitat for birds and other wildlife and which mimic wetland features of the historical flood plain of the Rio Grande.

From Wikipedia:Solar power in New Mexico

From Wikipedia:Wind power in New Mexico

As of the end of 2021, New Mexico had 4,001 megawatts (MW) of wind powered electricity generating capacity, responsible for 30% of electricity produced that year. Wind power in New Mexico has the potential to generate more than all of the electricity consumed in the state.

From Wikipedia:New Mexico § Wealth and poverty

New Mexico is one of the poorest states in the U.S. and has long struggled with poverty. Its poverty rate of roughly 18% is among the highest in the country, exceeded only by Louisiana and Mississippi. Nearly 30% of New Mexico's children were in poverty, which is 40% higher than the national average. The vast majority of births (72%) were financed by Medicaid, a federal healthcare program for the poor, the highest of any state. As of May 2021, around 44% of residents were enrolled in Medicaid.

The New Mexico Legislature is considering implementing a statewide guaranteed basic income program targeting poorer residents; if enacted, it would be only the second U.S. state after California with such a policy. In August 2021, Santa Fe announced a one-year pilot program that would provide a "stability stipend" of $400 monthly to 100 parents under the age of 30 who attend Santa Fe Community College; the results of the program will determine whether the state government follows suit with its own basic income proposals. Las Cruces, the state's second largest city, is officially discussing the enactment of a similar program. W

Instead of handing out tickets, Albuquerque is offering jobs to homeless people. October 16[2]

In January 2016, New Mexico sued the United States Environmental Protection Agency over negligence after the 2015 Gold King Mine waste water spill. The spill had caused heavy metals such as cadmium and lead and toxins such as arsenic to flow into the Animas River, polluting water basins of several states. The state has since implemented or considered stricter regulations and harsher penalties for spills associated with resource extraction.

Page data
Retrieved from "https://www.appropedia.org/w/index.php?title=New_Mexico_community_action&oldid=668096"
Cookies help us deliver our services. By using our services, you agree to our use of cookies.
Categories:
About Appropedia · Policies · Contact · Content is available under CC-BY-SA-4.0 unless otherwise noted.